Don't Miss
Home / Editorials / Dear Dan Gilbert: It’s Time to Do Everything in Your Power to Save LeBron’s Legacy and City of Cleveland

Dear Dan Gilbert: It’s Time to Do Everything in Your Power to Save LeBron’s Legacy and City of Cleveland 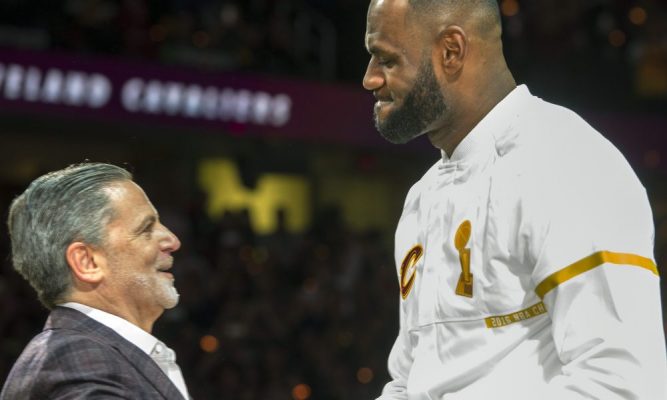 The Cleveland Cavaliers are in deep trouble.

No, they’re going to be fine for the 2017-18 season. Neither Kyrie Irving, Kevin Love or Tristan Thompson have been moved and will remain in town for the upcoming season. LeBron James will continue wearing the Wine and Gold, at least for this season. However, there’s a feeling of defeat and a numbing frustration, only tempered by the still-tangible emotional recall of the incredible (and improbable) 2016 championship run.

The reality, though, is that those precious memories need to be held onto tightly, and memorialized. It took 46 years for the Cavs to bring home that elusive title, which was delivered in large part by the greatest player of his generation, LeBron James.

However, today the franchise stands on the precipice of a familiar doom: the moment James walks away again. It might be another long stretch before the Cavaliers are truly in contention, depending on how owner Dan Gilbert handles this summer and the upcoming season.

With rampant rumors of James preparing, or at least seriously entertaining, a move to Los Angeles, you’d think owner Gilbert would batten down the hatches in attempting to retain the services of arguably the best player since Michael Jordan. This hasn’t actually been the case. In fact, there’s evidence Gilbert is personally laying the asphalt for the future Hall of Famer’s exit.

First, he fired general manager David Griffin, an executive James valued and respected. Then, former All-Star Chauncey Billups turned down the vacant general manager position due to Gilbert reportedly low-balling him. The fact that Billups chose to play in Ice Cube’s Big3 league aren’t the best optics for the Cavaliers and could be a tell-tale sign about James’ future.

To be fair, Gilbert and acting general manager Koby Altman are playing from behind in some respects, due to the curious actions of Indiana Pacers general manager Kevin Pritchard. Similar to a nixed Paul George deal with the Celtics, The Undefeated’s Mike Wise reported that Pritchard reneged on another George-to-the-Cavs deal, involving Kevin Love and Denver Nuggets guard Gary Harris.

Contrary to popular opinion, an NBA team (the Nuggets) did want Love. Conversely, cementing a prevailing opinion, Pritchard and the Pacers’ front office simply would not stand for George shining on contending teams, especially in the Eastern Conference. This aborted deal shouldn’t be easily cast aside, as it could have altered James’ plans. Prior to his trade to the Oklahoma City Thunder, George was known to have preferred playing with James (instead of the Los Angeles Lakers, his desired destination), even if it meant staying in Cleveland long-term.

Gilbert’s handling of this offseason being absolutely key to championship success, the Cavs have only the signings of shooter Kyle Korver (who arrived in a trade last season), swingman Jeff Green, and veteran point guard Jose Calderon to show so far. Korver’s shooting and positional size make him a valuable piece. His three-year deal for $22 million is tenable but also runs the Cavs’ luxury tax bill from $20.4 million to $42.7 million. The 35-year-old Calderon is an odd signing, because while still a threat offensively, he’s one of the worst defenders in the league at his position.

There were rumors of the Cavs having their eyes set for free agent big man Zach Randolph, who has since gone to Sacramento, but even so, how would this have actually helped a roster that needs to get more athletic?

There’s no way to know if any of these signings, or any additional moves, will turn James one way or the other. While he’s stayed in contact with Gilbert, he’s notably elected to stay out of the recruitment of players.

As constructed, the team will likely get back to the NBA Finals, even with Gordon Hayward signing with the Boston Celtics. Perhaps they will have a shot at a wounded Warriors (or the much improved Houston Rockets) for the magnificent send-off James deserves.

Barring some creative offseason wrangling next summer, a send-off is probable, which Gilbert has likely already wrapped his head around. Since keeping James in Cleveland would be the optimal outcome, what can the owner do to convince him to stay?

First, he has to change the perceptions of his relationship with James. It’s not just about making nice with the team’s best player, who Gilbert castigated on James’ way down to South Beach in 2010. James is a generational talent that chose to come back. He wants to be in Ohio because he understands the effect he has on his home region, which wouldn’t get the same attention without his presence.

Second, and most importantly, Gilbert has to acknowledge the strong likelihood that he’ll never have a player of James’ caliber again and operate under that assumption. Encouraging him to maximize his prime in Cleveland should rank No. 1 on any priority list. The problem, of course, is that James still can’t stand Gilbert.

Here’s a video from the championship celebration last season.

"We wouldn't be here if the leader, the hometown MVP had not come back to his state…" – @Cavs owner Dan Gilbert https://t.co/vQ2q8VJ7RZ

There’s significant pride on both sides of the aisle, but Gilbert has to recognize having James is analogous to having the Joker from the deck. Consider that current iteration of the powerhouse Warriors is a direct reaction to James’ brilliance. His talent keeps Cleveland winning, relevant in NBA circles, and in the public eye.

Without James, the Cavaliers will be thrust back into the Dark Ages. Gilbert will be facing a mass exodus of his star players, and a deep rebuild requiring tremendous draft luck in the coming years. Holding this eventuality off for five or six years, and continuing a winning culture that will stay long after James retires, should rank more than preferable — it should be paramount.

James’ legacy is largely set. The 2016 NBA champion fulfilled his obligation to Cleveland. There’s still time for Gilbert to get his own legacy, as Cavs owner, on the right side of history.