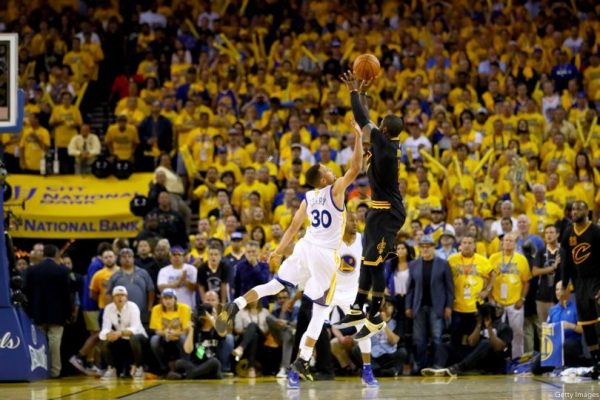 For Cleveland Cavaliers All-Star point guard Kyrie Irving, it is undeniable that his game-winning three-pointer over Golden State Warriors MVP point guard Stephen Curry with 54.9 seconds left in Game 7 of the 2016 NBA Finals was one of the greatest shots of all-time.

Not only did the stunning victory give the reeling city of Cleveland its first championship in 52 years, but Irving’s life took quite the turn as well.

“Yes, my life’s changed drastically,” Irving said on Saturday to Cleveland.com. “It’s kind of, you’re waiting for that validation from everyone, I guess, to be considered one of the top players in the league at the highest stage. That kind of changed. I was just trying to earn everyone’s respect as much as I could.”

Irving opened up about his life since winning a championship title with the Cavs during his Best Buddies, Ohio charity event on Eagle Avenue in downtown Cleveland.

“I never thought I’d be an NBA champion when I was 24 years old,” Irving said. “I just had to re-start, regroup and re-prioritize what I wanted to accomplish as a player and also as a teammate, this summer.”

It’s just so satisfying of a journey for Irving, who reflected on the span of time between his injury during Game 1 of the 2015 Finals to his epic three-point dagger in last June’s miraculous Game 7 win for the Cavs, who became the first team in NBA history to dig themselves out of a 3-1 deficit in a Finals series to win it all.

“Dating back to Game 1 of last year’s Finals, and then this year’s Finals, actually going through it and giving it everything I could, it was just a culmination of everything,” Irving said. “The fans, Golden State and Cleveland, the media, as much importance as was on this series, I’d never been a part of anything like that. It was even more special.”