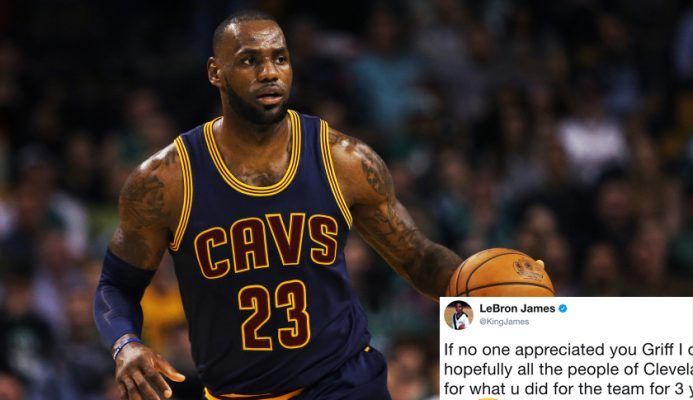 This is going to be quite the interesting offseason to say the least.

Shortly after owner Dan Gilbert and the Cleveland Cavaliers had decided to part ways with general manager David Griffin, Cavs superstar LeBron James sent out a tweet both thanking Griffin for his services and what appeared to be throwing some subtle shade towards Gilbert.

If no one appreciated you Griff I did, and hopefully all the people of Cleveland! Thanks for what u did for the team for 3 yrs! We got us 1?

According to Brian Windhorst of ESPN, James and his camp weren’t notified of the decision to let Griffin go until shortly after it had been made.

James had previously expressed his desire for the Cavs to retain Griffin and publicly vouched for the general manager earlier this year:

“It makes no sense why he shouldn’t get an extension,” James said of Griffin. “He’s pulled every move—he’s tried to make every move happen—to better this team to be able to compete for a championship. So we wouldn’t be in this position, obviously, without him and without the guys that are here—from the coaching staff to the players to Griff. He’s been a big piece of it.”

The four-time MVP has always had a contentious relationship with Gilbert and with James’ 2018 free agency looming, Cavs fans can’t help but fear the worst possible outcome happening to them, again.