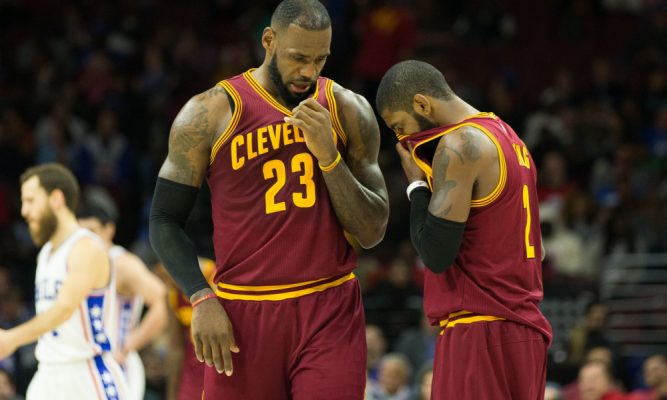 The potential fallout from the departure of Cleveland Cavaliers general manager David Griffin could extend to next year with LeBron James conceivably leaving the team again via free agency. That possibility has Kyrie Irving reportedly making it known to other players that he could seek a trade, rather than be stuck in a rebuilding situation like the one he was in during his first three years with the Cavaliers.

In writing about how Irving and James were reportedly gauging Jimmy Butler‘s interest in being traded to the Cavs, Joe Cowley of the Chicago Sun-Times noted Irving’s reported contingency plans if James departs:

“All-Star Kyrie Irving has been contacting some of his former Team USA teammates and letting them know that he might be willing to push for a trade, especially if he feels the Cavs’ run could end quickly with James able to opt out after next season.

“Through back channels, Chicago would be one of the places that Irving would be interested to play.

“Clearly the asking price for Irving would be too rich for what the Bulls have, and a third team would also have to be brought into that mix.”

Irving has three more years to run on his current Cavaliers contract and would become an unrestricted free agent in July 2020, when he’ll still only be 28 years old.