Video: Matt Barnes Says Isaiah Thomas Needs to ‘Shut Up’ and Find His Role on Cavs 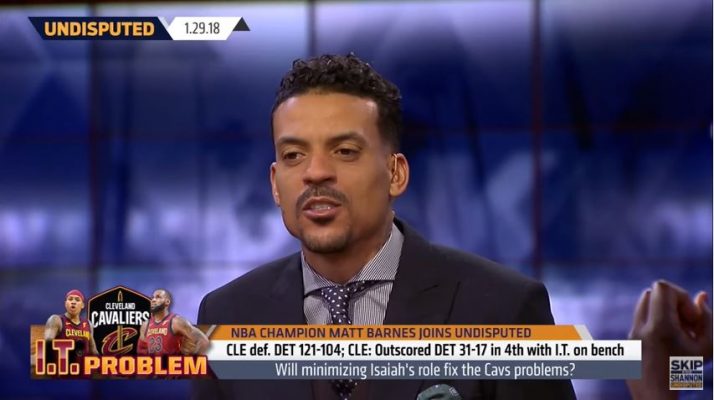 Recently, Cleveland Cavaliers point guard Isaiah Thomas has been making more news with his words than with his play.

The 5-foot-9 guard has been quite vocal about what has been plaguing the Cavs as of late despite the fact that he is still finding his role alongside LeBron James, Kevin Love, and the rest of his teammates in Cleveland.

On Tuesday, retired NBA player Matt Barnes joined FS1’s “Undisputed” to discuss what Thomas did wrong leading up to his return from injury, and what he needs to do going forward this season.

“I think the reason why this whole conversation has taken place is because all the talking he was doing leading up to his return,” Barnes said. “He’s a very confident guy, and he needs to be. He’s a small guy amongst giants. So I love the confidence, don’t get me wrong, but like I said I think all the attention came to him and all the criticism is coming now because of all the talking he was doing before he got back.”

Later, Barnes put it even more bluntly, saying Thomas needs to step back and try to fit in with the well-established veteran culture within the Cavs locker room.

“It’s a different situation when you go to a team of a caliber of Cleveland,” he said. “You really just got to go in there and shut up, and just find the culture, and figure out where exactly you fit in on and off the court. You gotta be able to vibe and have that chemistry with your teammates on and off the court. I’m sure with all the talking he’s doing and possibly coming at Kevin Love, he may be rubbing guys the wrong way already and that’s what you don’t want to do. Especially on a team like this.”

Thomas and the Cavs have received quite a bit of criticism in the last few weeks as they have struggled to find success on the court. Luckily for them, winning solves most problems in the NBA. If they can build upon their current two-game winning streak, and return to looking like a force in the Eastern Conference, it is likely that much of the focus will shift away from what has gone wrong, and return to what a team of this caliber can achieve by the end of this season.