‘Undisputed’ Crew Rips Apart Isaiah Thomas: He’s Not the Star He Thinks He Is 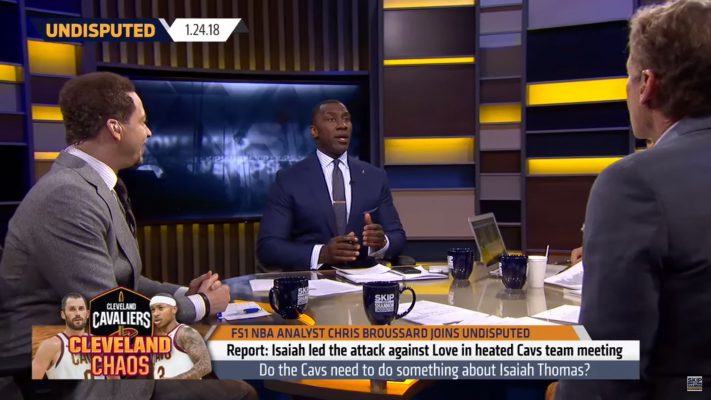 The chaos in Cleveland is reaching critical levels. While Isaiah Thomas returning from injury seemed like a dream come true just a few weeks ago, it now seems that he is at the center of the current tumult that is impacting the team both on and off the court.

On Wednesday, Fox Sports’ Skip Bayless, Shannon Sharpe, and Chris Broussard discussed how Thomas has affected the Cleveland Cavaliers‘ chemistry, and even went as far as to say that the 5-foot-9 guard is not quite the star he seemingly thinks he is.

“Kick rocks Isaiah,” Sharpe said, speaking for Kevin Love regarding the reports that Thomas led the charge when it came to criticizing Love in Monday’s team meeting. “First of all, since you got here you have no seniority in any matter. You just got here a month ago. Where you been?”

Sharpe wasn’t done either. He continued to discuss Thomas’ and Love’s future in Cleveland.

“(Tyronn) Lue, I don’t know what y’all gonna do with me or him, but one of us needs to go. One of us needs to go. Now he’s virtually impossible because he’s what we call a ‘too.’ He’s too small and too selfish, so that basically makes him untradable,” Sharpe said. “Here’s the thing, Kevin Love had no problem playing third fiddle to LeBron (James) and Kyrie (Irving). He said, ‘I’ll be damned if I’m playing second fiddle to Isaiah Thomas because he’s not better than me.’ Isaiah Thomas thinks he’s a superstar after one good year. Russell (Westbrook) didn’t become a superstar after one year. Steph (Curry) didn’t, James Harden. Put some time in bruh.”

Broussard then chimed in, continuing to rail on Thomas.

“Of course, Isaiah it’s ludicrous, it’s ridiculous for him to come out against Kevin Love,” Broussard said. “Here’s what I hope happened because they said it got fiery. If Isaiah Thomas went at Kevin Love, LeBron James and anybody else there with some seniority, and I could even say Dwyane Wade just because of his stature in the league. Tristan (Thompson) because he’s been there with Kevin Love throughout the duration, should have stepped up for Love and been like, ‘Hold on, hold on.’ You been to war with this guy for three and a half years. He helped you win a championship. He was playing the best ball of his career until the little man got here.”

Finally, Broussard commented on reports throughout Thomas’ career that may have pointed to the fact that he has been a difficult teammate all along.

“I said, I think I said on this show over the summer that there was talk that players had trouble playing with Isaiah in Boston,” he said. “I still keep hearing from people around the league, guys don’t enjoy playing with him, even last year. Look, I get it, you’re 5’9,” you gotta have that chip on your shoulder, but you also have to have an edit button.”

It’s clear that trouble continues to brew in Cleveland at the moment. Though it is unclear just how much of a role Thomas has been playing in it. While Broussard and Sharpe are employing quite a bit of conjecture, it certainly does not paint a pretty picture. Hopefully, Thomas, Love, and the rest of the Cavs are able to put these troubling reports behind them very soon.