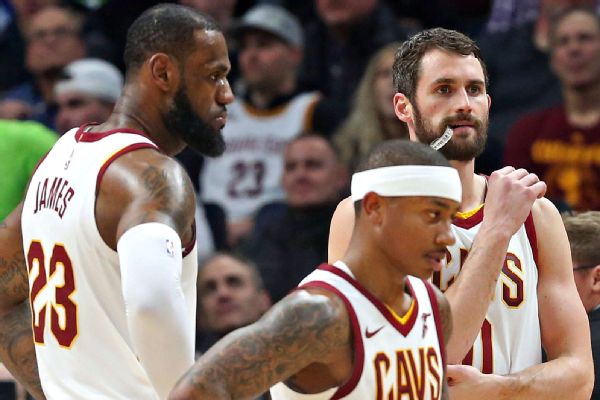 Earlier this week, reports of a growing divide within the Cleveland Cavaliers‘ locker room seemed to serve as an explanation for their lack of success in recent weeks. It now appears that the players who were rumored to be at the center of those issues are looking to ease the tension.

News indicated that Isaiah Thomas had led the charge in the accusations directed at Kevin Love during a heated team meeting on Monday. On Saturday, Thomas downplayed the events of the team meeting, as well as the breakdown of his and Love’s relationship.

“To be real, I didn’t call him out,” Thomas said of Love. “I asked him why wasn’t he at the game during the game supporting his teammates. And then after the game, I didn’t [get to] ask him because he wasn’t there. So I was seeing where he was. So I didn’t call him out any. So those reports that whoever is saying that, there’s no bad blood between me and him. We go back to fifth and sixth grade [as AAU teammates]. I asked him a question where he was, and it was never clarified. And that’s all it was. …

“Whoever reported that it was, and we was bashing Kevin Love, there was nothing to bash him about. We just wanted to know where he was and why he didn’t play.”

Teammates reportedly questioned whether or not Love quit on the Cavs during last week’s loss to the Oklahoma City Thunder. Since then, Thomas has seemingly tried to shift the focus from the past to the future.

On Friday, the 5-foot-9 guard sent out a tweet to tell both his supporters and doubters that the Cavs will turn their recent losing ways around. Now, it looks as though he is looking to let the press know that he and Love never had issues with one another.

It’s promising to hear that that the rift within the Cavs’ roster seems to have been overblown, but there is no doubt that the only thing that will truly mend the Cavs’ issues will be a return to consistent success on the basketball court.

cleveland cavaliersfeaturedIsaiah Thomaskevin lovenews ticker
← Previous Story Isaiah Thomas Angrily Fires Back at Those Criticizing His Defense
Next Story → Dwyane Wade’s Tragic Revelation on Why He Missed Game vs. Pacers