Isaiah Thomas Claps Back at Boston Reporter Who Criticized Him 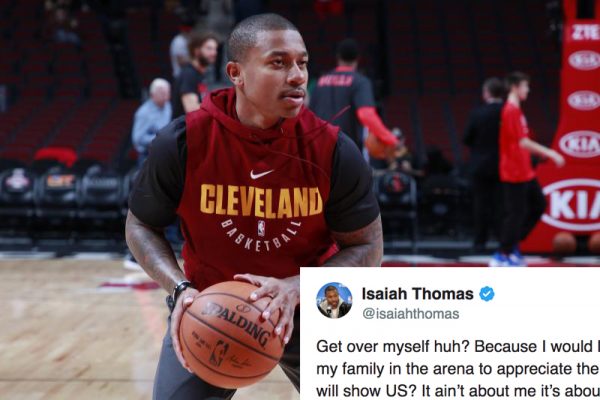 The request made by Cleveland Cavaliers point guard Isaiah Thomas for his former team, the Boston Celtics, to not present a tribute video upon his return on Wednesday night sparked an annoyed tweet from a member of the Boston media. In response, Thomas delivered a blistering rebuttal in the same fashion.

@isaiahthomas ego may be even bigger than @KingJames! No tribute video? Get over yourself! #Celtics #Cavs

Get over myself huh? Because I would like to actually PLAY & have my family in the arena to appreciate the LOVE the city/organization will show US? It ain’t about me it’s about my family… Ha you get over yourself you dumbass https://t.co/LiqeXUVTwD

The Cavaliers and Celtics will play at TD Garden marking the first time that Thomas will return to Boston as a member of the Cavs since he was dealt as part of the Kyrie Irving deal in August. It was in Boston where Thomas first developed into an All-Star performer.

Thomas emerged as a quality player with the Celtics despite questions about his height (5-foot-9) and the fact that he was the last selection in the 2011 NBA Draft. In addition to serving as the epitome of an underdog, the Boston fan base embraced him even more because of his willingness to battle during the last postseason amid physical pain and mental anguish from a family tragedy.

That physical pain was the result of a hip injury that’s kept him off the court so far this season. However, that will change on Tuesday night, when Thomas is expected to come off the bench to play in the Cavaliers’ home game against the Portland Trail Blazers.

Despite the controversy, the Cavaliers’ cautious approach in getting Thomas back to full health means that he’s actually not expected to face the Celtics. That’s a protective measure in order to limit the prospect of any physical setbacks caused by the back-to-back scheduling.