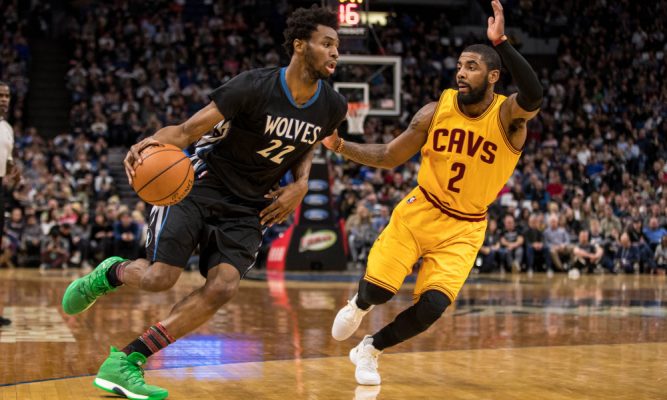 When it was reported last week that the Minnesota Timberwolves were interested in possibly dealing for disgruntled Cleveland Cavaliers point guard Kyrie Irving, many had assumed that any potential trade would’ve included the young and talented Timberwolves forward Andrew Wiggins.

According to ESPN’s Darren Wolfson, however, the Wolves have no intention of dealing Wiggins despite the Cavs making their desire to gain a blue-chip youngster in return for Irving known.

Not Wiggins, and it'll take him and more.

Wolfson added that without Wiggins included in a trade, the two teams have not been able to get close to a deal.

Word is they want more than Aldrich to make the $$ work. They want something of substance in addition to Wiggins. No trade w/ MN is close.

While the Wolves seemingly have no intention of parting ways with the 6-foot-8 Wiggins, AmicoHoops.net has reported that Wiggins himself may have some interest in rejoining the Cavs. Wiggins’ career in Cleveland was cut short when he was shipped to Minnesota as the marquee piece in the trade that made Kevin Love a member of the Cavaliers:

“While the Timberwolves aren’t willing to include Wiggins, sources have told Amico Hoops he would welcome a return to the team that drafted him with the No. 1 overall draft pick in 2014.”

Despite Wiggins’ potential interest, the Wolves’ unwillingness to deal him may force the Cavs to turn to other potential trade partners, including the Phoenix Suns and the Denver Nuggets.

It seems Irving’s trade demand has lessened his value on the market for all potential suitors, as interested teams look to take advantage of his clear desire to continue his career on a different team.