Cleveland Cavaliers vs. Indiana Pacers Game 1 Recap: Starting From Behind 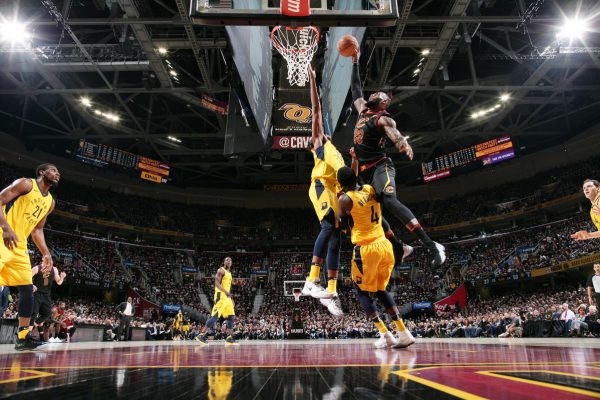 (Cleveland, OH) — Despite a triple-double from LeBron James, the Cleveland Cavaliers dropped Game 1 of the first round of the NBA playoffs to the Indiana Pacers by a score of 98-80 at Quicken Loans Arena on Sunday afternoon. Since James’ return in 2014, the Cavaliers had won all 12 first-round games, with both that mark and James’ streak of not having lost a first-round game since 2012 coming to an end.

James finished with 24 points, 12 assists and 10 rebounds, but the Cavaliers as a whole struggled with their shooting touch throughout the game, especially when it came to 3-pointers. For the game, they hit 30-of-78 (38.5 percent) from the field, but managed just 8-of-34 (23.5 percent) from beyond the arc, with those game-long struggles making any sustained comeback effort futile.

“They came in and dictated the tempo, were more aggressive,” James said. “They just played inspired basketball.”

Only two other Cleveland players managed to crack double digits in scoring, with J.R. Smith notching 15 and Larry Nance Jr. delivering 10 on the afternoon. Kevin Love and Rodney Hood narrowly missed that threshold with nine points apiece, with Love collecting a game-high 17 rebounds.

“The defense was okay, but offensively, we didn’t make shots and we didn’t take shots,” Cavs head coach Tyronn Lue said after the game.

The Cavaliers dug themselves a huge hole right off the bat and trailed by as many as 21 in that opening period before finding themselves down 33-14 after the first 12 minutes. The chief culprits in watching that deficit grow were the Cavaliers’ miserable shooting during the quarter, connecting on just 5-of-20 (25 percent) from the field, while also committing six turnovers. Three of those field goals came on inside feeds to Nance, with the team collectively missing all eight of their long-range shots during the period.

“We were just sloppy with the ball. They were getting to the foul line and scoring in the paint,” Love said. “That first quarter set the tone.”

The second quarter saw Cleveland make multiple runs at getting the margin into single-digit territory. However, each surge by the Cavs was countered by the Pacers, who ended up taking a 55-38 lead into halftime. While the Cavaliers’ shooting from the field improved during the quarter, they again delivered some self-inflicted wounds by missing five free throws in the period. Indicative of the Cavs’ shooting struggles was the fact that Love was held scoreless until hitting a 3-pointer from the right corner with 1:51 left in the half.

Trailing by those 17 points at intermission, the Cavaliers soon found themselves in even worse shape as they faced a 23-point deficit at 61-38 with 10:28 left in the third quarter. Over the remainder of the period, they managed to chip away at that lead by preventing the Pacers from hitting any of their field-goal attempts for a seven-minute span. That allowed Cleveland to forge a 25-7 run to make it 70-63 with 1:06 left in the period and when the quarter ended, Indiana had led by a 73-65 score.

“They played more physical than we did and it showed,” Smith said. ” If we could bottle that third quarter up and part of the fourth, the way we played, with intensity, diving on the floor, we’ll be good.”

The Cavaliers continued their push in the early stages of the final period, with James’ layup with 10:29 to go in the game making it a seven-point contest at 76-69. That proved to be the Cavs’ last chance as the Pacers put together a 12-2 run in just a three-minute span to boost the lead back up to 17 at 88-71.

“They took advantage of everything what we wanted to do,” James said.”They were more physical at the point of attack and were more precise with what they wanted to do. We couldn’t score the ball, and obviously in this league, you gotta score the ball. Defensively, we were pretty good. We gave up 98 points, but 80 is not gonna cut it. We’ll make some adjustments and be a lot better.”

Game 2 will also be in Cleveland, with that Wednesday night contest set to tip off just after 7 p.m. Following that contest, the series shifts to Indianapolis for games on Friday and Sunday night.