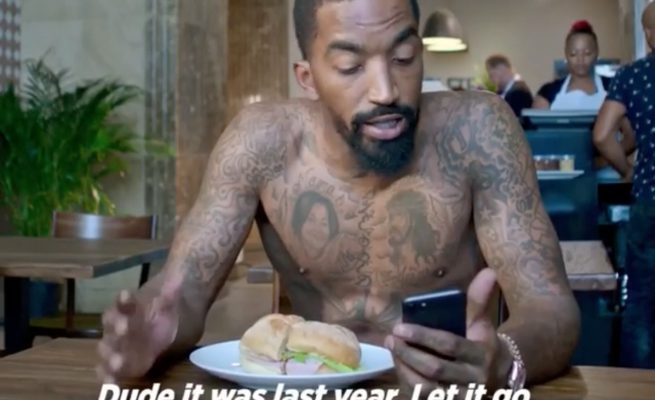 Cleveland Cavaliers guard J.R. Smith put his acting chops on display when he starred in a hilarious commercial for the upcoming film “The Grinch.”

Smith himself posted the commercial to his own Instagram page, and the topic of the advert is a clear sign that the guard still knows how to poke fun at himself.

At this point, Smith taking off his shirt should never come as a surprise. It has, in may ways, become his trademark move. What is perhaps more surprising is that he was willing to poke fun at his epic miscue that came in the final seconds of Game 1 of the 2018 NBA Finals.

Aside from starring in movie commercials, Smith is currently working to get back on the court after elbow soreness and an MRI left him unable to participate in Wednesday night’s 2018-19 season opener. While no structural damage was found in the elbow, it is possible Smith will miss more time to rehab the injury.

In the end, this commercial serves as a reminder that basketball is just a game and a form of entertainment just like a movie. It may feel like life and death sometimes, but what matters most is that the players and fans all have fun.

There are few players in the NBA better at reminding people of that very fact than Smith.