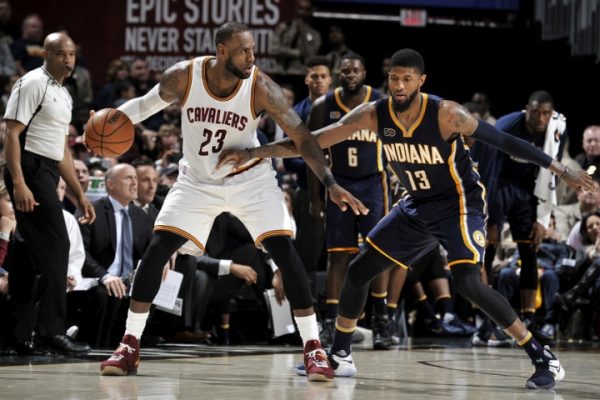 (Cleveland, OH) – Kevin Love’s nine points in the second overtime, including a 3-pointer with 26.5 seconds left, led the Cleveland Cavaliers to a 135-130 victory over the Indiana Pacers on Sunday night at Quicken Loans Arena.

Love’s 3-pointer had given the Cavaliers a 131-127 lead, with the Pacers then missing a three-point attempt with 16.9 seconds left. On the subsequent inbound, Kyrie Irving was immediately fouled and converted two free throws to boost the margin to six, yet the Pacers answered with three free throws. Irving then converted two more free throws with 7.1 seconds remaining to put the game away.

“I was just trying to clean the glass on both fronts. I think it was just that the other guys were getting the ball to me,” Love said. “This was almost a game where whoever had the ball last was going to win.”

The contest had gone back and forth in both the fourth quarter and two overtimes, with great performances and dramatic moments highlighting this stretch. Both teams had seemingly clinched victories during the first extra session, only to see things suddenly change.

Indiana’s Paul George, a 90 percent foul shooter, had a chance to win the game with 1.4 seconds left in the first overtime after he was fouled, but missed his first attempt. After converting the next shot, Cleveland failed to inbound the ball, sending the game to a second overtime deadlocked at 114. Just prior to George’s miss, the Cavs’ J.R. Smith had hit a dramatic 3-pointer with 2.8 seconds remaining that also appeared to be the game-winner.

“We haven’t had much time to go over what we should do in late-game situations,” LeBron James said about the inbounding problem.

Before the first overtime began, the Pacers had twice taken the lead during the fourth quarter, the second time coming with 1:25 left. The Cavs would tie it up at 104 and had an opportunity to take the lead with 26 seconds remaining. However, Tristan Thompson missed both of his free-throw attempts, though Indiana then missed its chance to win it in regulation.

“We’ve got to get better going down the stretch with our late game because we all know in playoff basketball, you’re going to be in one and two-possession games. Still, it’s a good win for us,” James said.

Those events overshadowed a pair of outstanding performances on both sides of the ball, with James and George locked in a duel. In 52 minutes, James finished with another triple-double on 41 points, 16 rebounds and 11 assists. George’s effort was equally outstanding with 43 points, nine rebounds and nine assists.

One of George’s late 3-pointers was a source of controversy because it had sparked an argument between James and Thompson over the defensive breakdown. Cavs head coach Tyronn Lue wasn’t too concerned during his postgame remarks.

“The game’s on the line and you want to win. Paul George makes a tough shot and they got into it. It’s part of the game,” Lue said. “You like to see that passion. They were mad and frustrated and we wanted to win that game. Some miscommunication there, but they got over it.”

“He definitely got us over the hump,” Lue said about Love. “When they went small, we went big.”

Rounding out the group, Thompson narrowly missed a double-double with 12 points and nine boards, and Channing Frye came off the bench with 10 points and six rebounds.

“It was a great test for us, especially with the postseason coming up,” Thompson said.

The final portion of the Cavaliers’ three-game homestand will take place on Tuesday night, when they host the Orlando Magic. That game will tip off just after 7 p.m. ET and the Cavs will seek to continue a winning streak against the Magic that now stands at 16, including eight in a row at Quicken Loans Arena.