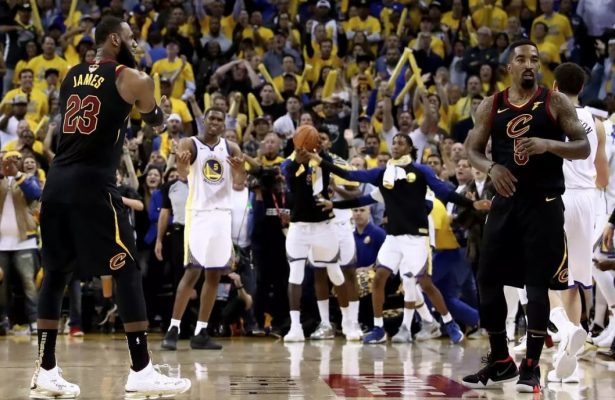 The name of Cleveland Cavaliers guard J.R. Smith forever became linked to NBA Finals infamy when his brain cramp in the final seconds of last year’s Game 1 turned a potential victory into an eventual overtime defeat.

Despite the criticism that the veteran has faced since that ill-advised moment, he appears to have moved on from that situation.

Jesse Washington of The Undefeated profiled Smith, with the Cavs guard pointing out his philosophy toward dealing with the lasting image that moment helped create:

“It was tough, but it was the same after Game 2, 3 and 4. I didn’t take it no harder than those losses just because I made a mistake. We all make mistakes. For my teammates to know that and have my back, [Game 1] wasn’t that bad. Talked to my coaches, everybody stood behind me 100 percent. The main thing was, OK, granted, you didn’t shoot the ball, but what if you ain’t get the rebound? Then what? We still would have been in the same situation. I could have shot and missed. Then what?

“I mean, it’s an honest mistake. People make mistakes all the time.”

Smith’s approach comes from the perspective of having dealt with far more important issues than the result of a basketball game.

The most devastating of those mistakes took place a decade ago, when he served 24 days in jail for reckless driving. That was the result of an auto accident that took the life of his best friend from high school, who was a passenger in the vehicle.

“I was in a really bad car accident and I was driving, my best friend passed away. Andre Bell, rest in peace, Dre,” Smith said in a 2016 video. “I had never really forgave myself for that. The family has, and friends have, but I haven’t for myself. Now I can honestly say I can live and deal with it through forgiveness.”

More recently, Smith and his wife had to deal with the ongoing drama of the premature birth in January 2017 of their daughter Dakota.

Moving on from the Game 1 debacle for the 33-year-old Smith has meant a rigorous offseason of work to get back to his previous level of play after two consecutive down seasons. His friend and trainer, Chris Brickley, described how Smith is approaching the 2018-19 season:

“This has been by far the most he’s been in the gym,” said Brickley, who has known Smith for 10 years. “We’ve worked out at 7 in the morning this summer, 8 in the morning this summer. We’ve also worked out at midnight. We’ve put in a ton of work. This has been the most that I’ve witnessed him work on his game. … Some days, you can tell when he’s out there that that’s his getaway. His peace of mind. You can just see it in his face.

Smith will get his opportunity to make people forget his mistake when the Cavaliers begin their regular season on Oct. 17 with a road contest in Toronto.