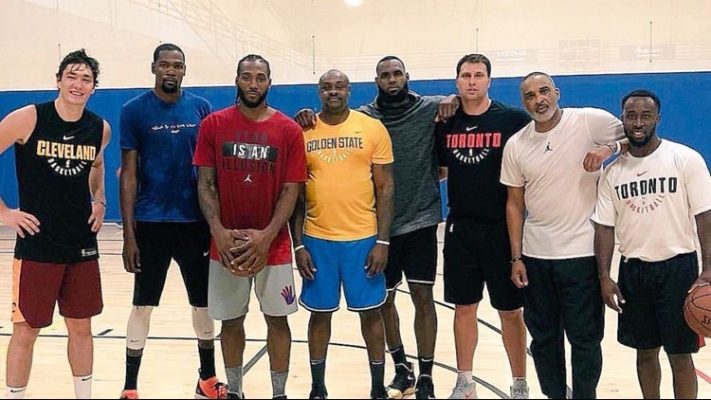 The Cleveland Cavaliers said goodbye to arguably the greatest small forward in NBA history this offseason when LeBron James chose to sign with the Los Angeles Lakers as a free agent back in July.

Unless the Cavs make a huge roster move, the player who seems destined to replace James as the starting small forward in the 2018-19 season is promising international player Cedi Osman.

Last season, James took Osman under his wing in many ways. That trend continued during the offseason when Osman was seen working out with James and several of the league’s other best small forwards such as Kevin Durant and Kawhi Leonard.

Osman spoke to members of the press about the incredible experience of practicing with some of the best players in the NBA.

“I was paired with K.D. (Durant) and we started shooting, and my shots were all going short. He was always telling me, ‘Shoot up, shoot up,’ and I said, ‘I can’t right now,’ because I was pretty excited,” Osman remembered. “That was a pretty good moment for me, him telling me to shoot up. Even if it’s something simple, but him telling me that was, him and also after that Bron (James) and Kawhi were always talking to me, so it was an unbelievable experience.”

It certainly sounds like Osman took more than just a few basketball tips away from the experience. Hopefully, his relationship with James and the rest of the elite forwards he played with helps him grow into the player fans hope he can be.

Though Osman averaged just 3.9 points and 2.0 rebounds per game last season, he showed flashes for much more when given the opportunity. In the final game of the 2017-18 regular season, Osman recorded 18 points, seven rebounds, and six assists. He also impressed in this offseason’s NBA Summer League when he averaged 20.0 points, 8.0 rebounds, 4.5 assists, and 2.5 steals across two games.

For the sake of Cavs fans everywhere, let’s hope it was the latter.