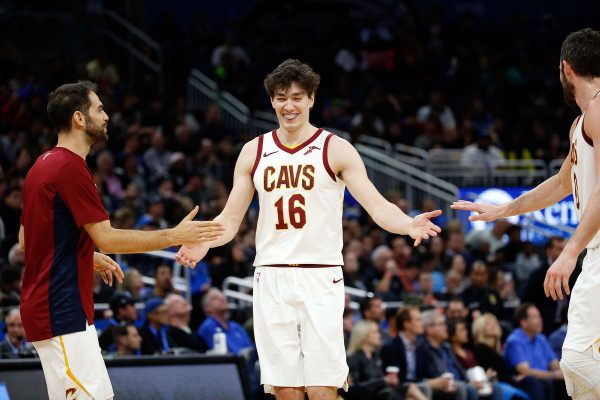 Cleveland Cavaliers small forward Cedi Osman made news on Tuesday when he was seen working out with some of the best small forwards in the league, including former Cavs star LeBron James.

While the news did come as something of a surprise, it appears as though all of Osman’s hard work may be for a very specific reason.

According to a recent report by Sam Amico of AmicoHoops.net, Osman may have the inside track to claim the starting small forward position for the Cavs this season.

“Osman is expected to compete with Rodney Hood (once signed) and perhaps Kyle Korver for James’ old starting small forward spot,” Amico wrote. “Osman’s positive attitude and hustling defense, some suspect, may give him the edge.

“He looked great on the Cavs’ summer team and spent time playing for Turkey in the FIBA World Cup qualifiers immediately after the season. So it’s been lots of hoops for a player who’s clearly looking to take it to another level.

“And working out with the best small forwards in the business, not to mention the man who previously held the job in Cleveland, should only help Osman’s cause.”

Osman averaged just 3.9 points and 2.0 rebounds per game in his rookie season last year, but when he was given the opportunity to shine, he did just that. In the final game of the 2017-18 regular season for example, Osman recorded 18 points, seven rebounds, and six blocks in 39 minutes of play.

He continued that kind of production in NBA Summer League when he averaged 20.0 points, 8.0 rebounds, 4.5 assists, and 2.5 steals in the two games he participated in.

If he is able to put up those kinds of numbers when the 2018-19 season rolls around, Osman could certainly become on the league’s rising young stars.