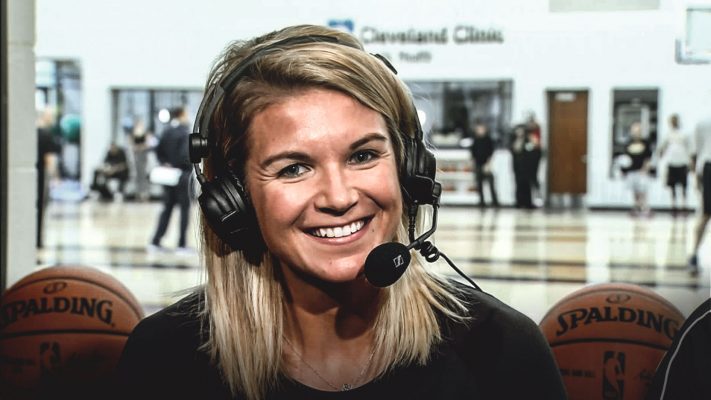 For the past six seasons, Cleveland Cavaliers broadcasts on Fox Sports Ohio (FSO) have had sideline reporter Allie Clifton as one of their key components. That connection was severed last month when news broke that she was leaving to accept a position to work on game broadcasts for the Los Angeles Lakers.

With the preseason set to get underway within the next few weeks, Clifton offered a heartfelt goodbye on social media.

From playing basketball at Van Wert High School to The University of Toledo – my journey w/ hoops was just beginning. From day 1 outside the lines, to witnessing the most epic experience of my sports journey, a World Championship – the game of basketball helped me discover another true passion & love: Sports Broadcasting. For the last 6 seasons, as Fox Sports Ohio’s Sideline Reporter covering The Cleveland Cavaliers, the team that I grew up rooting for, in my home state – was & always will be, nothing short of a dream. —————————— During those 6 years I was reminded that if I am willing to find comfort in the uncomfortable, growth will always be a part of my story. So, as hard as it is to close this Cleveland chapter – I have fulfillment in my heart & purpose in my mind that I’m ready for that next chapter to begin (Link in bio). But first, THANK YOU! To Francois McGillicuddy, Tom Farmer & Pat Kilkenny – for giving me a chance, being patient with me from day 1 & always pushing me to be a better piece to the puzzle at Fox Sports Ohio. To the Cavs Organization – from Dan Gilbert, David Griffin, Koby Altman, Coach Lue, Tad Carper, Dave Dombrowski & down the line, THANK YOU for trusting me as a part of your Organization. For supporting me & always allowing me to be ME as I worked alongside your team – it was an honor to represent the Cleveland Cavalier Franchise. To my producers Brent Valenti, Jeff Platz & Joe Ranyak, those who work in the trucks tirelessly, to Mitch & my Starting Five: Jeff, Campy, Fred & AC – you have shaped me & helped me grow from the second I picked up a FSO mic. You have prepared me for whats NEXT. From being ONE, to bringing the fun & treating me with the utmost love; TEAM is what we only knew. ——————————— Lastly, to you – the FANS! As an Ohio girl born & raised … I can only pray that everyday/night I stepped on the hardwood to do my job, I made you PROUD. From the bottom of my heart – THANK YOU. Your loyalty & support will forever mean the most. ——————————— Much love, always Cleveland! Thank You ❤️

The 30-year-old Clifton’s role on FSO had largely consisted of interviewing players and coaches before and after games. In addition, short chats with players at the start of halftime and with assistant coaches just before play resumed were also staples of each broadcast.

Clifton also had served as a co-host on the Road Trippin’ podcasts, in which her fellow co-hosts were Channing Frye and former Cavs forward Richard Jefferson.

The move by Clifton was especially emotional because of her lifelong connection to the state of Ohio. She grew up in the northwest portion of the state and played for the women’s basketball team at the University of Toledo from 2006 to 2010. Her tenure with the Cavaliers and FSO began in 2012.

In her new position on Lakers broadcasts, Clifton elevates that role to host of Spectrum Sports’ coverage of Lakers games. As has been the case for the past four years, Clifton will have a front row seat to watch LeBron James, who joined the Lakers in July.

FSO has yet to name Clifton’s replacement, though such behind-the-scenes activities are no doubt taking place. That’s because the Cavaliers’ exhibition season begins early next month, with the regular season set to start on Oct.17 with a road game against the Toronto Raptors.