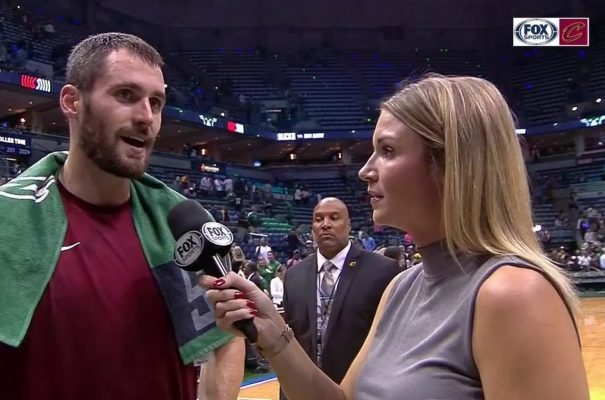 As one of the components of the Cleveland Cavaliers‘ local television broadcasts over the past six years, Allie Clifton has been a very visible presence on Fox Sports Ohio. However, just as LeBron James did last month by leaving for the Los Angeles Lakers, Clifton will also be joining the Lakers, though in a broadcast capacity.

The new destination, reported by Sam Amico of Amico Hoops, represents a promotion for Clifton, who will now be the studio host for Lakers games that are broadcast on Spectrum SportsNet. Working for FSO, Clifton had served as a sideline reporter who interviewed Cavaliers players and coaches at halftime and after each game the network broadcast. In addition, she was also part of the network’s pregame show.

Clifton has strong Ohio roots, having grown up in Van Wert. She was a member of the University of Toledo’s women’s basketball team from 2006 to 2010, then worked as a sports reporter for the Toledo television station WTVG until taking the FSO job.

FSO confirmed Clifton’s departure, but chose not to indicate her new employer:

Statement from FSO on this: “We can confirm Allie Clifton is no longer with FOX Sports Ohio as the Cavaliers sideline reporter. While we are sad to see her go, we appreciate her contributions to our Cavs broadcasts and wish her the best in her future endeavors.”

The network is currently looking at new candidates to replace Clifton, with one reported candidate being former Milwaukee Bucks sideline reporter Telly Hughes, who was let go by Fox Sports Wisconsin after nine years of work at the network. Just a few weeks ago, Hughes made the announcement on social media:

After 8-plus seasons, I was informed the @Bucks wanted to go in a "different direction". I would like to thank @Bucks for an amazing opportunity for a kid from https://t.co/meYFi1NhID. Louis to cover the NBA.

The eventual hiring by FSO will need to be done by early October, when the Cavaliers begin their exhibition season. They commence with the regular season on Oct. 17 with a road game against the Toronto Raptors.