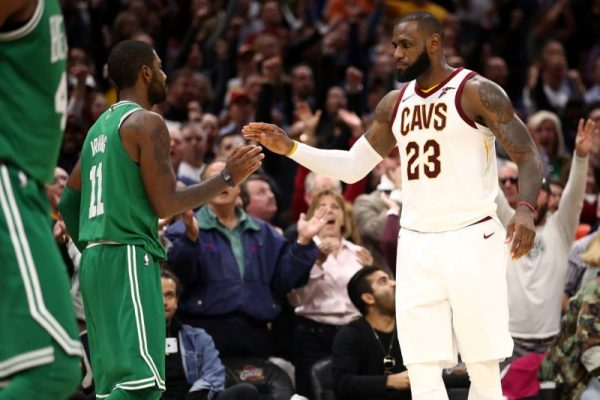 Up to this point, there have been few clear signs regarding where LeBron James plans on signing this offseason. If he wanted to sign with the team most prepared to take on the Golden State Warriors next season in terms of existing talent, he would likely opt to sign with the Boston Celtics.

Signing with Boston would of course mean James suiting up next to his former Cleveland Cavaliers teammate Kyrie Irving once again.

According to MassLive.com’s Fred Katz, Irving hasn’t spent too much time dwelling on a possible reunion.

“Irving shook his head and said, ‘No,’ when asked if he had spoken with the Celtics about the chances of reuniting with the NBA’s best player,” Katz wrote. “The two went through a public breakup last summer, when Boston acquired Irving in a late-August trade from Cleveland, where Irving teamed up with James from 2014 to 2017. The Cavaliers went to the NBA Finals in all three of those years, defeating the Golden State Warriors to win the title in 2016.”

Irving uttered a few more words on the subject when he was at an event to promote his upcoming film, “Uncle Drew,” on Tuesday.

“In this business, I’ve experienced it all, and I’ve seen a lot,” he said. “So we’ll see what management decides.”

James and the Cavs faced off against Irving and Celtics several times during the 2017-18 season, including an epic seven-game Eastern Conference Finals series that the All-Star had to miss due to knee surgery. In all of the stars’ interactions throughout the season, it seemed clear that there was a level of mutual admiration and respect. Still, based on the number of rumors that Irving wanted to leave Cleveland to get out from under James’ huge shadow, it seems likely that he would prefer for James to sign elsewhere.

It is unclear how serious of a contender the Celtics are in the James sweepstakes. If he does ultimately decide to sign with the Celtics, they would become to clear favorites to win the Eastern Conference and perhaps even the NBA Finals next season.

Considering Irving’s short-winded responses, it seems likely that he would rather compete against James in the pursuit of a championship, than play alongside him.