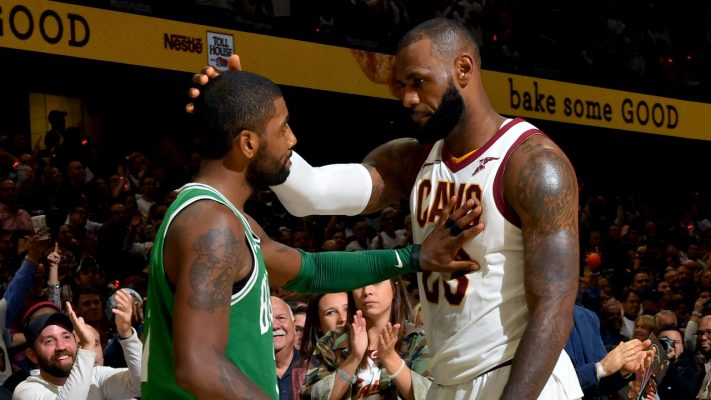 The trade of point guard Kyrie Irving to the Boston Celtics was the biggest offseason news for the Cleveland Cavaliers, with the relationship between Irving and LeBron James coming under closer scrutiny as a result. Yet despite the belief that Irving remains at odds specifically with James and, to a much lesser extent, Kevin Love, because of the messy end to his tenure in Cleveland, the seven-year veteran dispelled the notion.

Irving offered an opinion on the prospect of again being with the one-time Big 3, who will be reunited as teammates for the Feb. 18 All-Star Game in Los Angeles.

Kyrie was asked about being able to play with LeBron and Kevin Love during All-Star weekend. He answered, “When you’re on a championship team, it’s a bond that can’t be broken … We created history.”

All three players were central figures in the Cavaliers’ iconic Game 7 victory in the 2016 NBA Finals over the Golden State Warriors. James’ block was followed by Irving’s 3-pointer that served as the game-winner, while Love’s dogged defense of the Warriors’ Stephen Curry helped lay the groundwork for James’ clinching free throw.

The history that was created was the Cavaliers’ first-ever title, along with the first major sports championship in the city of Cleveland in 52 years. Three days after Game 7, more than one million people lined the streets of downtown Cleveland to mark the occasion.

The Cavaliers’ current struggles are in stark contrast to the Celtics’ status as the top seed in the Eastern Conference. The two teams met in last year’s conference finals, a situation that still could happen again in May. However, in that hypothetical situation, Irving and the Cavs’ Isaiah Thomas will have switched uniforms, since Thomas and Jae Crowder were key parts of the trade package that Cleveland received in exchange for Irving.