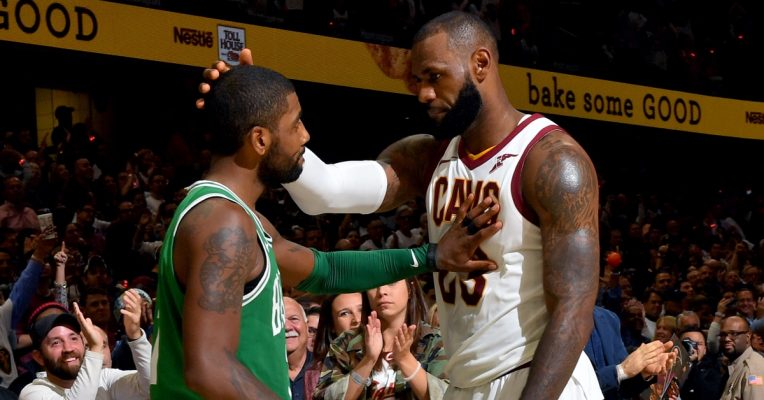 The reported discord between Cleveland Cavaliers forward LeBron James and his former teammate Kyrie Irving that first surfaced last summer in the wake of Irving’s trade request now appears to be a thing of the past. The two spoke about their current statuses as they prepare to once again become teammates in Sunday’s NBA All-Star Game.

With the selection process being changed for this season’s annual contest, there was some concern about whether or not East team captain James would choose Irving in the wake of their conflict. However, James made it clear that such a consideration was never an option:

“If he was available I was taking him,” James said.

That’s a big change from the irritation that James reportedly expressed after Irving indicated that the 15-year veteran’s presence was a chief reason for his trade request. Now past such feelings, James also reflected on the unique bond that he and Irving share, specifically winning the 2016 NBA title for the Cavaliers:

“Those thoughts still go into my head of how great it was to break the drought in our city, over 50-plus years,” James said. “The both of us had magical Finals runs and, so it’s always special.”

Irving was also enthusiastic about the reunion, with Joe Vardon of Cleveland.com reporting:

James and Irving were on the court for Team LeBron’s practice Saturday. Irving said “it’s pretty awesome” when asked what it was like to be teammates with James again, and said the conversation was “just normal.”

“Sorry, I know that sounds like not a lot, but it’s just normal.”

In addition to playing with James, Irving is enthused about his fellow teammates that will play for the East squad:

“I was telling some of the guys that this was, for me, myself, Russ (Russell Westbrook), K.D. (Kevin Durant), A.D. (Anthony Davis), and LeBron, and it’s probably one of the best fives I’ve ever been on the court with,” Irving said. “Just the talent is, wow, man. And you see how big of fans we are with one another and we’re all on the floor together, it’s pretty awesome. I think that lineup is something that you kind of envisioned in the video game. For me to actually be part of it is something awesome.”

Had Kevin Love not been injured last month, the former Big 3 of the Cavaliers would have been reunited for one night. However, that injury has knocked Love out of the contest for a second consecutive year.