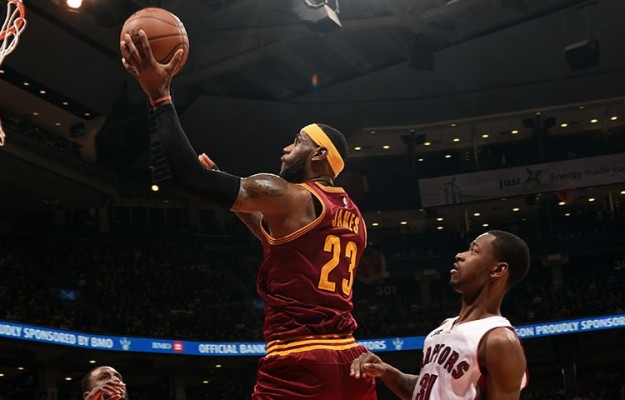 (Toronto, ON) – Despite a furious fourth-quarter comeback by the Toronto Raptors (38-23), the Cleveland Cavaliers (39-24) held on for a 120-112 statement victory on Wednesday night at the Air Canada Centre.

After squandering a 19-point lead in the third quarter to trail the Raptors by two in the fourth, the Cavs made some huge shots down the stretch to secure their 20th win in 24 games.

“This was a big bridge game for us tonight,” said Cavaliers head coach David Blatt. “We won the (season) series with Toronto and it could be a factor with the way the East is shaping up. This game indeed was extremely important.”

LeBron James had yet another clutch, MVP-caliber performance on the evening as he led all scorers with 29 points and a season-tying 14 assists, with 15 of his points coming in the fourth quarter.

“For me, I’m the leader of this team no matter what goes on,” said James. “I gotta try to keep my composure, which I was able to do in the fourth quarter, and make some plays to help us win this game.”

Shooting guard Lou Williams, who is third in the NBA in bench scoring, racked up 21 of his 26 points in the final 12 minutes of the game, as Cleveland did not have an answer to stop him. In order to hold off the Raptors down the stretch, the Cavs had to fight fire with fire, as Williams and shooting guard DeMar DeRozan (25 points on 10-19 from the field) shot lights out.

“We go with what we practice and what the game plan is,” said James. “Obviously you have to make some adjustments sometimes, which we did. Lou Williams is a guy that can make a few free throws and when he sees that ball go in, he can start making that three.”

LeBron and his teammates refused to let the Raptors steal a win at home, as Kyrie Irving (26 points and eight assists) and Kevin Love (22 points and 10 rebounds) completed a strong effort from the Cavs’ “Big Three.”

Raptors center Jonas Valanciunas, who had a superb game statistically with 26 points and 11 rebounds, clotheslined LeBron to the floor in the closing minute of the third quarter. After review, Valanciunas was given a flagrant one foul for his rough play.

With an impressive performance on the night, J.R. Smith (15 points and eight rebounds) and James Jones (season-high 14 points) shot the ball with ice in their veins down the stretch. The guard tandem drilled two three pointers each in the fourth quarter, while Timofey Mozgov scored 10 points for the third game in a row.

Up next on their slate, the Cavs continue their span of four games in five days as they will head south to take on the Atlanta Hawks (48-12) at Philips Arena.

“Like I’ve said before, it shouldn’t be about the team that we’re playing but it’s about our process,” said LeBron on the Cavs’ upcoming matchup with the Hawks. “Obviously Atlanta has been playing great basketball all year. We play defense like we’ve been doing the last couple months, we give ourselves a great chance to win.”

The top seed in the Eastern Conference will host the Cavs on Friday night, with the game scheduled to tip off shortly after 7:30 pm ET.