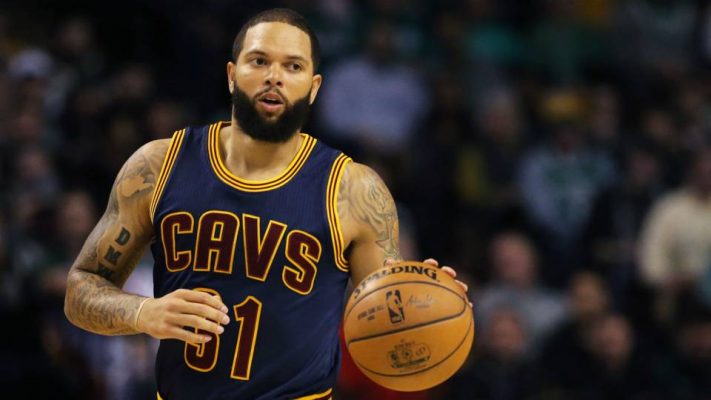 The signing of Deron Williams on Monday gives the Cleveland Cavaliers far more than a dependable point guard off the bench which they had been lacking since last summer.

That was evident when LeBron James spoke to reporters after the signing of the 12-year NBA veteran, who was most recently with the Dallas Mavericks, became official. When asked what the veteran point guard will bring to the Wine and Gold now that he’s officially on board, James replied:

“Automatic leadership. He’s run multiple franchises before and has played in big games before, so you know he won’t shy away from the moment.”

LeBron played with Williams in the 2008 and 2012 Olympic Games, winning a pair of gold medals.

“He can knock down shots and he can play make, so he’s going to help out a lot,” James continued. “When you’re on Team USA, you fantasize about playing with all of those guys, and I’ve been fortunate enough to play with a bunch of them throughout my career.”

Williams became the third significant addition the Cavs made since James let his frustrations boil over in January when he demanded the front office bolster a roster which he deemed was not of championship quality. Kyle Korver, the first of those pickups, was a teammate of Williams’ for more than two seasons with the Utah Jazz.

The time he spent with James in both Beijing and London, as well as with Korver in Salt Lake City, factored into a decision which Williams told ESPN’s Dave McMenamin was not difficult at all:

“It was kind of an easy decision for me, I think,” said Williams, who averaged 13.1 points, 6.9 assists and 2.6 rebounds for the Mavs this season. “I definitely looked at a couple other teams. But once Dallas informed me they kind of wanted to go in a different direction, the Cavs were the first team that jumped out at me. A lot of times you overthink things. I kind of went with my first thought.”

Any thoughts that Williams might have been eased into his new surroundings went out the window Wednesday night at Boston after Kyrie Irving was whistled for his second foul barely eight minutes into the Cavs’ game against the Celtics. Coach Tyronn Lue inserted him at that point and also kept him on the floor for the bulk of the fourth quarter.

His 2-of-8 shooting was a reflection in part of the two-plus weeks of inactivity Williams had during the end of his time with the Mavericks. On the bright side, he and Richard Jefferson were the only two Cavs who finished with a positive plus-minus in the 103-99 loss.

As Williams said afterward to Marla Ridenour of the Akron Beacon Journal, his period of adjustment won’t take long:

“The sets are pretty simple here,” Williams said. “It’s just getting the calls and remembering them. Sometimes when T-Lue calls something out my mind is just scrambled trying to think of what it is. It wasn’t bad today.”

A three-time All-Star, most recently in 2012 with the then-New Jersey Nets, Williams has not reached a conference finals since the Jazz fell in five games to the San Antonio Spurs in 2007. The Spurs then went on to sweep the Cavs in James’ first trip to the NBA Finals.

James went into Friday night’s game at Atlanta averaging a career-best 8.9 assists a game for the season. While those numbers speak highly of his unselfishness, it’s also something of a tacit acknowledgement of the void left when Matthew Dellavedova signed with the Milwaukee Bucks.

Williams, the third-leading active player in assists behind only Chris Paul and James, is more than ready to provide his former teammate with an occasional breather from those duties and also another scoring option:

“I played with Kyle, and he’s one of my good friends and we still talk. I just feel like I’ll be comfortable here. I’ll have a significant role here, with the need for a backup for Kyrie and also being able to play with Kyrie. We get a chance to play together and of course competing for a championship is something that I haven’t had a chance to do.”

An amusing sidelight to his arrival is the possible confusion in the huddle and the locker room between him and Derrick Williams, whose career has been revitalized since he joined the Cavs on Feb. 9. James told Cleveland.com’s Joe Vardon that Derrick Williams, who is seven years younger than Deron, will need to find another nickname other than D-Will:

“We’re figuring that out,” James said after the Cavs beat Milwaukee 102-95 Monday night. “He’s been bumped because he’s younger than D-Will, but we got to figure out his new nickname.” 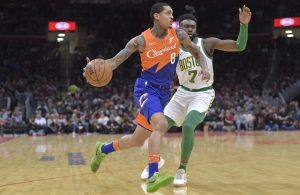 Veteran guard Jordan Clarkson is no longer a member of the Cleveland Cavaliers, but he couldn’t help but look...