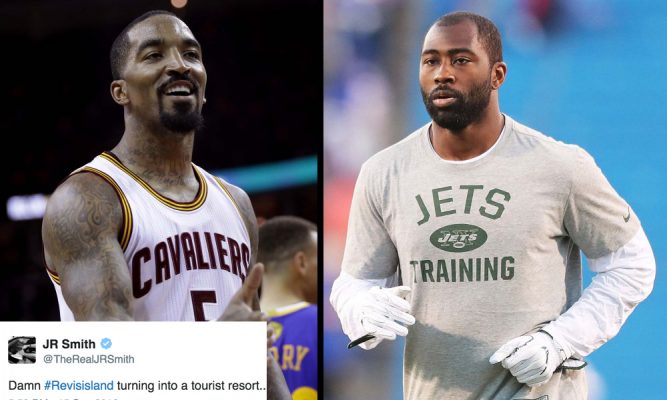 Though veteran shooting guard J.R. Smith has yet to re-sign with the Cleveland Cavaliers, he does remain active in one area: social media. That activity was the source of a brief online dustup between Smith and New York Jets cornerback Darrelle Revis over the past two days.

Revis’ team was facing the Buffalo Bills in a nationally televised matchup on Thursday night. Early in the contest, Buffalo receiver Marquise Goodwin caught a pass with Revis covering him and ended up scoring on an 84-yard touchdown pass as a result.

That play continued what’s been a rough start to the 2016 NFL season for Revis. In addition to that touchdown pass, he allowed Cincinnati Bengals wide receiver A.J. Green to catch 12 passes for 180 yards last Sunday in the Jets’ one-point loss

ESPN reported that Smith was watching the game and decided to take a jab at Revis’ nickname of his coverage area, known as “Revis Island.” The name is based on the All-Pro cornerback’s ability to shut down opposing receivers.

The 31-year-old Revis was obviously too busy to respond immediately. However, just over 21 hours later, he took his own jab, noting that he was destined to end up in the Pro Football Hall of Fame in Canton, OH. That’s in contrast to Smith’s apparent chances of making the basketball shrine in Springfield, MA.

@TheRealJRSmith still heading to Canton though. What about you??? ?

Nearly a half hour after that tweet, Revis added one final tweet to end the short feud by acknowledging that both of them had won championships in their sport.

We both won ships. We both will go down in the history books. Just think its funny him saying that especially after we've crossed paths. ☺️

Smith’s came three months ago with the Cavaliers, while Revis’ came during the 2014 season as a member of the New England Patriots. Both have played for New York teams during their careers, with Smith’s January 2015 trade from the New York Knicks sending him to Cleveland.