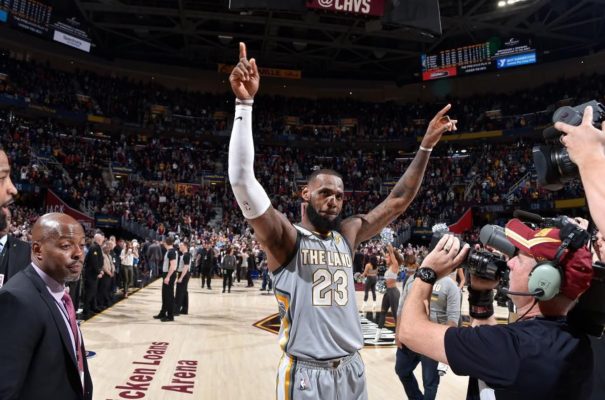 As recently as last week it had been reported that LeBron James‘ relationship with Cleveland Cavaliers general manager Koby Altman had begun to sour. It seemed there was very little trust between the team’s front office and its biggest star.

Now, after a whirlwind of trades prior to the NBA trade deadline last week, it appears that James and Altman are back on the same page.

Following Tuesday night’s win over the Oklahoma City Thunder, James had nothing but praise for the man who managed to retool the entire Cavs roster just hours before the trade deadline arrived.

“I think Koby did a heck of a job understanding what our team needed. It just wasn’t working out for us,” James said. “He felt like, obviously you guys saw his quotes. He made the changes that he felt best fits our team.”

James continued by describing what his role is in welcoming his new teammates to Cleveland, perhaps signaling that the adversarial relationship that was reportedly developing between him and the front office is a thing of the past.

“Then it’s on me to make sure the new guys that come in, that I make sure that they fit in and make it as seamless as possible,” he said. “That’s my job. This is the third game in a row that my voice is gone. I’m just trying have the communication at an all-time high for us, for the new guys and for the rest of the guys here.”

The four-time MVP has been more than just a vocal leader. Since his new teammates took the court alongside him, James has averaged 30.5 points, 9.0 assists, and 8.0 rebounds per game. He is currently the only All-Star playing for the Cavs. While that will change once Kevin Love is healthy enough to return, it is clear that James has once again assumed a passionate leadership role that had seemed to wane as the Cavs struggled both on and off the court.

James seems more than satisfied with his new teammates. With two wins in the books, they will look to continue that success when they return from the All-Star break to face off against the Washington Wizards on Feb. 22. Just last week the 2017-18 season seemed doomed, now the sky is the limit.