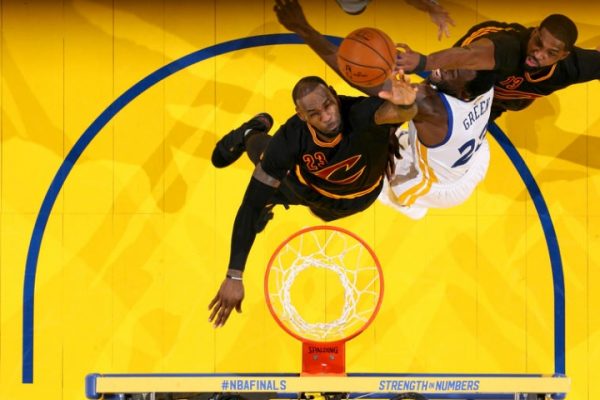 (Oakland, CA) — Falling victim to a bad stretch during the third quarter was costly to the Cleveland Cavaliers as they dropped a 132-113 decision to the Golden State Warriors in Game 2 of the NBA Finals at Oracle Arena on Sunday night. The defeat now puts the Cavs behind 2-0 in the best-of-seven series.

After continually battling back during both the first half and the opening six minutes of the third quarter, the Cavaliers trailed by just four at 86-82 following a Kyrie Irving basket with 5:41 left in the quarter. However, a 16-6 run over the rest of the quarter proved to be devastating, with the Cavaliers missing eight of their last 10 shots from the field and continuing to struggle in containing the Warriors offense.

In attempting to bounce back from 35 percent shooting from the field during that lethal third period, Cleveland’s comeback efforts in the fourth period never materialized, with Golden State eventually taking as large as a 22-point advantage.

Cavaliers head coach Tyronn Lue indicated the keys to success in the upcoming games for the Cavs to even the series up.

“Defense, having an awareness where we have to be locked in and you have to be alert at all times,” Lue said.

The duo of LeBron James and Kevin Love combined for 56 points on the night, with James collecting a triple-double with 29 points, 14 assists and 11 rebounds. Love contributed 27 points and added seven rebounds, with Irving the only other Cavs player to score in double figures with 19 points and seven assists.

“I thought we were more physical from the point of attack,” James said. “I thought we did a better job of that in Game 2.”

Irving had a rough shooting night, hitting just 8-of-23 from the field, but James isn’t concerned about his teammate:

“I just told him to continue to be patient and the game will come to you,” James said. “Just keep asserting yourself. We have to figure out a way to get him going, get him going early. He’s been such a big part of our success the last three years.”

Love is also confident that things will turn around for Irving when they take the court again:

“I would imagine Kyrie’s going to come out and have a great Game 3,” Love said.

That triple-double etched James’ name in the record books again by matching Magic Johnson for the most in Finals history in that unique category with eight. One indication of just how impressive that record is, is that the next closest players have only accomplished that feat twice.

On the Golden State side, the duo of Kevin Durant (33) and Stephen Curry (32) combined for 65 points, giving Durant 71 points in the two Finals games thus far. Lue spoke about the problems that Durant presents to his team:

In the early going, the Cavaliers had jumped out to a quick 9-3 advantage, but then watched the Warriors put together a 23-7 run. The Cavs were able to chip their deficit down to six by the end of the period at 40-34 by forcing eight turnovers, compared to the Warriors’ four during the entirety of Game 1.

Despite the Warriors pushing the lead up to as many as 12 in the second quarter, the Cavaliers once again battled back. Iman Shumpert‘s two free throws with 1:40 left before halftime reduced the margin to a single point, though the Warriors headed to intermission holding a slim 67-64 lead.

“We definitely have a sense of what they’re about, but this is a team that you can’t let go on runs,” Love said.

During that first half, a more aggressive approach by Cleveland was evident. James led the way by collecting a double-double in the first half, with virtually all of his shots coming on drives to the basket, allowing him to head to intermission with 18 points and 10 assists. That mentality resulted in three first half fouls on the Warriors’ Draymond Green.

“Offense isn’t a problem right now,” Irving said. “We just need to have a sustained effort for the whole game.There’s obviously some things we can correct and we can address those after we watch the film.”

The series now heads East, with Game 3 set for Wednesday night at Quicken Loans Arena, with the Cavs needing to win at least once to send the series back to Oakland. Tipoff is set for just after 9 p.m. ET.

“They play well at home and they won their first two games like they’re supposed to, but coming to a tough environment, we knew it was going to be tough,” Lue said. “Now, we get a chance to play in front of our home crowd and we do well there. They won two games, now we have to go home and regroup.”