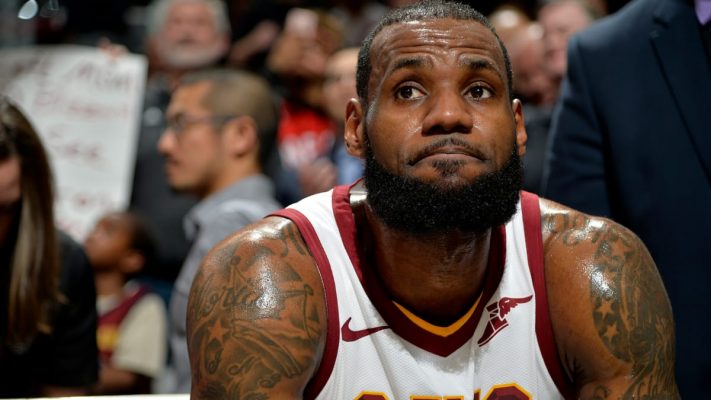 The past six weeks for the Cleveland Cavaliers have seen the team stumble to a 7-13 record, with the team being on the receiving end of both beatdowns and late collapses. The current situation has apparently aggravated the already-tenuous relationship that LeBron James has with team owner Dan Gilbert and the front office, which makes James’ status beyond this season seemingly more uncertain.

ESPN’s Brian Windhorst discussed the issue in the aftermath of Saturday night’s embarrassing 120-88 pounding that was delivered at Quicken Loans Arena by the Houston Rockets:

“The biggest issue that’s hanging over the team right now is the adversarial relationship that has developed between LeBron James and the front office and ownership of this team,” Windhorst said. “You know, they have a trade deadline coming up in five days and LeBron is very frustrated that he has sat here and watched a bunch of star players traded since the end of the Finals: Jimmy Butler, Paul George, Chris Paul, who was an absolute master tonight, Carmelo Anthony, Blake Griffin.

“Meanwhile, the Cavs organization is looking at LeBron and saying, ‘Well, we have a hard time making a change in this roster or trading major pieces or spending a lot more money when you won’t commit to us for the future.’ To make matters worse, LeBron has been more and more dispirited over the last couple of weeks weeks. His effort level tonight was unacceptable. He was as equally culpable for the Cavs’ issues tonight as anybody else. His play and his effort level over the last several weeks has been as low as it’s ever been in his career. He just truly had a loss for words tonight. Only thing that he said with definition was, ‘I’m not the GM of this team.'”

James is expected to again enter the free agent market in July, with the current turmoil ratcheting up the concern that the 15-year veteran will again look to play with another team.

While simply winning would help solve many of the issues that are plaguing the team, figuring this out without one of the key pieces in place makes it more difficult. That piece is Kevin Love, who’ll remain out until at least late next month due to a broken hand.

The Cavaliers return to action on Tuesday night when they travel to Orlando to take on the Magic.