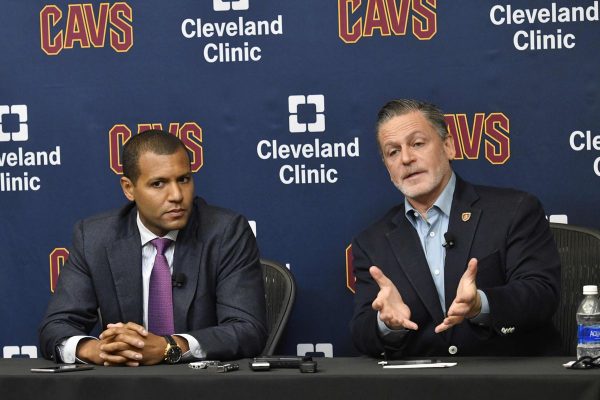 The drama emanating from the Cleveland Cavaliers‘ team meeting on Monday has continued. It was first reported that several players questioned whether the illness that forced Kevin Love to leave Saturday’s loss to the Oklahoma City Thunder was legitimate. It is now being reported that Love wasn’t the only one to bear blame.

According to ESPN’s Adrian Wojnarowski, fingers were pointed at members of the organization from the top down, including Cavs head coach Tyronn Lue, general manager Koby Altman, and even team owner Dan Gilbert.

“There was a sense that the team was largely accepting of Love’s explanation, and that the airing out of issues could have a positive impact on what has become an increasingly fractured locker room,” Wojnarowski wrote. “Within factions of the locker room, there has been blame for the Cavaliers’ struggles directed at everyone from Love to Isaiah Thomas, to Lue and the front office, led by Altman, and owner Dan Gilbert, league sources said.”

It is hard to decipher whether the Cavs’ recent struggles were caused by internal strife that had already existed before their current downward spiral, or if the finger pointing is a result of losing 10 of their last 14 contests.

Fans can hope that Monday’s team meeting did something to ease the tension that currently exists within the Cavs organization, but the only thing that would truly solve their problems would be a return to the winning ways that the organization has enjoyed for the past few seasons.