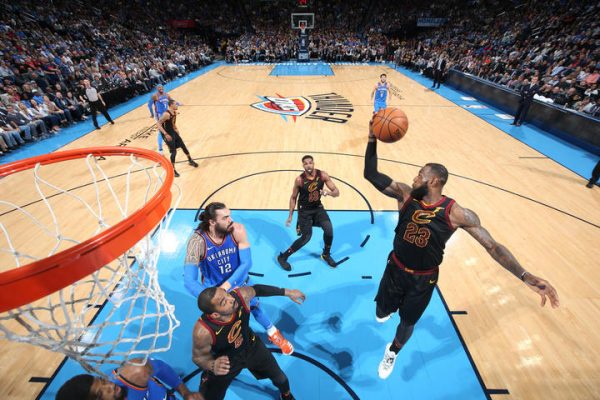 (Oklahoma City, OK) — Boosted by the combination of 37 points from LeBron James and continued energized play from the entire team, the Cleveland Cavaliers gained a measure of revenge by defeating the Oklahoma City Thunder by a score of 120-112 at Chesapeake Energy Arena on Tuesday night. The victory was the fourth straight for the rejuvenated Cavaliers and served as payback for the 148-124 thrashing given to them by the Thunder on Jan. 20.

James’ 37 points were in addition to his eight assists and eight rebounds on the night. He also nailed a trio of 3-pointers, part of 16 on the night for a Cavs squad that once again showed life throughout the contest.

“We came in with a great game plan and we were able to execute for a full 48 minutes,” James said after the game.

Leading in the area of 3-pointers for the Cavaliers was J.R. Smith, who knocked down six on the night to account for his 18 points, while one of the new arrivals, Rodney Hood, connected for four more. Hood finished with 14, as did Jordan Clarkson, with the latter guard also delivering four assists and three rebounds.

Larry Nance Jr. narrowly missed a double-double with 13 points and nine boards, eight of those rebounds coming on the offensive glass, while also swatting away three shots. The final newcomer, George Hill, ended his night with seven points and also dished out four assists, giving the new group a combined 48 points on the evening. Rounding out the double-digit scorers was Jeff Green with 10 off the bench.

“We’re just flying around,” James said about blending the newcomers into the lineup. “We continue to help each other, even when it doesn’t look like it’s going great for us, we’re still figuring it out on the fly, so it really helps out. The worst thing for us is going into the (All-Star) break.”

The Cavaliers were clinging to a four-point lead to start the fourth quarter, but quickly took control and frequently led by double-digits in those final 12 minutes. Having seemingly clinched the game on a pair of free throws by Nance with 34 seconds left that made it 117-109, Cleveland watched Oklahoma City connect from long-range with 23 seconds to go and then steal the inbounds pass. A Thunder shot attempt that would have sliced the margin to just two missed, with Smith then making a remarkable save and throw down to Nance, whose dunk officially put the game away.

“That was good basketball IQ,” James said of Smith’s save and pass. “You never want to save the ball underneath your own basket. You were taught that when you started playing basketball in the little leagues. So, for him to have heads up and Larry, being the athlete he is, to go get it and dunk it was a staple play for our victory tonight.”

The Cavaliers will now head into the All-Star break and have time to rest up for the final 26 games of the regular season. They take the court again on Thursday, Feb. 22, when they host the Washington Wizards in a game that will be nationally broadcast on TNT. Tipoff for that clash will be just after 8 p.m. ET.