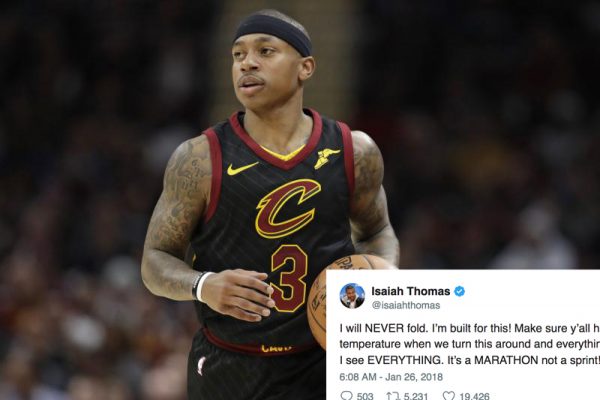 The Cleveland Cavaliers are in the middle of what seems to be an organization-wide meltdown. There are rumors of infighting, feuds, and lack of trust. There are also rumors that team owner Dan Gilbert is looking to sell the team sooner rather than later.

While it has been a breeze being a Cavs fan in recent years, it certainly is not easy now. Luckily, starting point guard Isaiah Thomas offered fans some much-needed hope via Twitter.

I will NEVER fold. I’m built for this! Make sure y’all have that same temperature when we turn this around and everything start clicking! I see EVERYTHING. It’s a MARATHON not a sprint! ?

Interestingly, Thomas has been rumored to be at the center of much of the tumult that reportedly exists within the Cavs roster. Perhaps seeing the controversy his actions caused has helped the 5-foot-9 guard have a change of heart. It is also possible that he is looking to endear himself to the Cavs fanbase despite the team’s current inability to find success on the court.

Considering the fact that the Cavs have now lost 11 of their last 15 games, it’s been hard to be hopeful for much of anything in recent weeks. Still, it’s promising to see that Thomas has not lost faith in himself or his team.