Cleveland Cavaliers vs. Toronto Raptors Game 3 Recap: Another Day at the Office 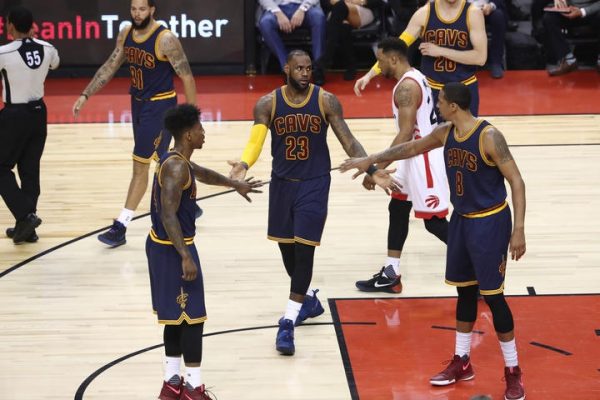 (Toronto, ON) – A 20-3 run to start the fourth quarter helped power the Cleveland Cavaliers to a 115-94 victory over the Toronto Raptors in Game 3 of the Eastern Conference semifinals at Air Canada Centre on Friday night. The win now gives the Cavs a commanding 3-0 advantage in the series and puts them one victory away from their third straight appearance in the conference finals.

Cleveland had clung to a 79-77 lead at the start of the fourth, but then pulled away as Toronto struggled to connect from the field. The Raptors hit just 1-of-12 from the field in the first six minutes of the period, allowing the Cavs to blow the game open and take a 99-80 lead with 5:47 left in the game. By the end of the contest, Cleveland had outscored Toronto 36-17 in the final 12 minutes, shooting 11-of-14 (78.6 percent) from the field during the quarter.

“Our second team guys came in and gave us a big push,” LeBron James said immediately after the game. “We knew we were going to get their best shot and we were able to get it done when it counted.”

James ended the night with a team-high 35 points, adding eight rebounds and seven assists. Kevin Love and Kyrie Irving each finished with 16 points apiece, with Love picking up a double-double with 13 boards. Kyle Korver came off the bench to score 14, with four of his baskets coming from long range, while Tristan Thompson reached double figures on the glass with 12 for the evening.

“Last year, it kind of fell on Bron, Kevin and me to score,” Irving said. “This year, guys are stepping up and doing the job.”

Love also gave credit to the bench for outscoring the Raptors by a 30-9 count:

“That group’s been great for us during the postseason,” Love said. “Those guys stepped up for us when we needed it.”

As a team, the Cavaliers dominated on the rebounding front, holding a 49-25 advantage. Cavs head coach Tyronn Lue offered an explanation as to how the team was able to control the glass:

“With our rebounding, especially with Tristan and Kevin, when they play small, we can pound the glass,” Lue said.

The Raptors were without starting point guard Kyle Lowry, who was resting an injured ankle. However, after getting completely shut down in Game 2, his backcourt partner DeMar DeRozan re-emerged by scoring 21 points during the first two quarters and finishing with 37 points.

“Without having Kyle, that made DeRozan more aggressive and he was able to find a rhythm,” Lue said. “He’s a tough scorer. We tried to mix it up and in the fourth quarter, he got out of rhythm.”

Throughout the first half, the Cavaliers struggled with ball movement and had moments of sloppy play. They managed just five assists on their 17 field goals, while committing eight turnovers during the half. Those first two quarters proved to be markedly different for the Cavs offense. After connecting on 53 percent from the field in the opening 12 minutes, Cleveland’s touch went ice-cold as they hit on just 32 percent of their field goals in the second period.

The evenly matched third quarter then saw both teams hold a lead, with a pair of Korver 3-pointers in the final minute of the period helping give the Cavaliers that 79-77 advantage entering the last quarter.

“Defensively, we got stops and Kyle got hot, and when he gets hot, you have to get him the ball,” James said in attempting to explain how things drastically changed in the fourth quarter.

When it came to defending the three-point shot, Cleveland was especially effective, holding Toronto to 2-of-18 from long-range.

“We made a conscious effort to send them off the line,” Irving said.

On Sunday afternoon, the Cavs will go for the sweep in a road contest that will be nationally broadcast on ABC. Tipoff for that clash will be just after 3:30 p.m.

“We have to play the way we did in the second half,” Lue said. “We have to bear down defensively and hold down the fort during the first half.”