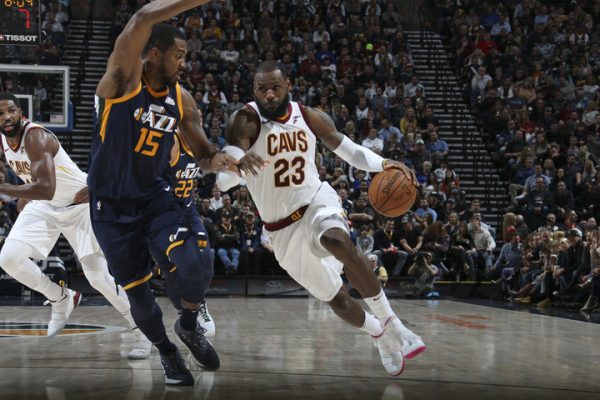 (Salt Lake City, UT) — A fourth-quarter comeback effort by the Cleveland Cavaliers fell agonizingly short as they dropped a 104-101 decision to the Utah Jazz at Vivint Smart Home Arena on Saturday night. The defeat sent them to their third straight loss and fourth in their last five contests.

Cleveland had trailed by as many as 15 during the third quarter and still faced a 10-point deficit at 85-75 with 8:26 left. They finally began to chip away at the margin and three times got to within a single point, the last time coming on a Kevin Love basket with 1:35 to go that made it 98-97 in favor of the Jazz.

Following a missed shot by the Jazz, Dwyane Wade had the chance to give the Cavs the lead with 52.8 seconds left. However, his miss was the Cavs’ last real shot at victory, with the Jazz clinching the game at the foul line.

“We turned the ball over and I thought defensively, we weren’t good.” Cavs head coach Tyronn Lue said after the game. “I thought they did a good job defensively against us, being aggressive.”

On his 33rd bithday, LeBron James paced the Cavaliers with 29 points and collected eight rebounds and six assists. He and Jeff Green combined for 17 of Cleveland’s fourth-quarter points, with Green finishing his night with 22 points and five boards off the bench.

“It’s a season of ups and downs,” James said about the team’s losing streak. “Hopefully, we can figure it out.”

The only other Cavalier to score in double figures was Love, who collected another double-double with 20 points and 10 rebounds, and Tristan Thompson, who closed with 11 points and five rebounds.

During the opening quarter, the Cavaliers had held a slim 13-12 lead after the first five minutes before then going on an 18-5 run. That gave them their biggest lead of the game at 31-17, with the Jazz closing the gap slightly by the time the period had ended at 32-22.

The Cavs inched the lead back up to 12 at 41-29 with eight minutes left in the second quarter before the Jazz ran off nine unanswered points. The margin would later dip to a single point, but solid defense in the final minute and a James turnaround jumper at the buzzer gave the Cavaliers a 53-48 halftime lead. The James jumper came just seconds after he had been fouled on a shot to the groin by Utah’s Thabo Sefolosha.

Holding a five-point lead at intermission, the Cavaliers went ice-cold in the third quarter, missing 12 of their first 13 shots from the field and ending the quarter shooting just 21 percent (4-of-19) in that department.

“They turned it up in that quarter and we settled a lot for 3-pointers,” James said.

After noting Cleveland’s lack of success in past games in Salt Lake City, Love also noted the change in the team’s shooting patterns during that disastrous third quarter:

“We haven’t had much success in this building,” Love said. “We just complacent and started taking jump shots instead of driving into the paint area.”

Utah hit 9-of-14 from the field to start the second half allowing them to go on a 22-3 surge that completely changed the momentum of the game. Despite those struggles, the Cavs battled back and missed an opportunity to make it a one-possession game in the closing moments of the third period and found themselves trailing 76-69 with one quarter left.

The Cavaliers will begin the 2018 portion of their schedule on Tuesday night with a home contest at Quicken Loans Arena against the Portland Trail Blazers. Tipoff for that clash will be just after 7 p.m. ET.