Report: LeBron ‘Pissed Off’ Cavs Got Isaiah Thomas Instead of Eric Bledsoe and Paul George 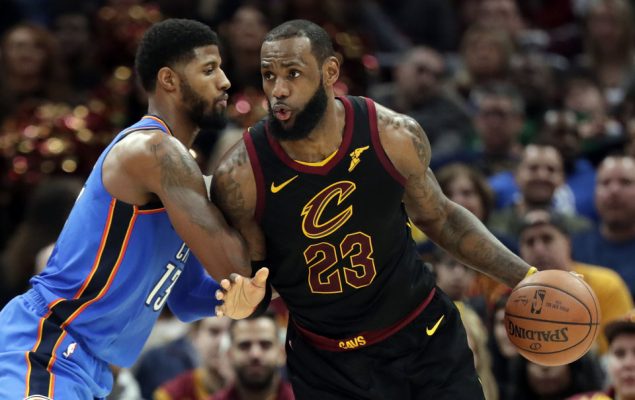 Amid all the chaos currently surrounding the Cleveland Cavaliers, now comes news that the team’s failed attempts to acquire Paul George and Eric Bledsoe during the offseason angered Cavs forward LeBron James.

ESPN’s Brian Windhorst appeared on the “The Lowe Post,” on Wednesday and indicated to the show’s host, Zach Lowe, that James was upset about the lack of a deal for either player. Windhorst went so far as to say that James was under the belief that both could’ve been acquired by the Cavs.

“If you want to know what’s really pissing LeBron off, he felt like the Cavs could have had Paul George and Eric Bledsoe,” Windhorst said.

Neither deal materialized, with George sent to Oklahoma City just hours before the start of the free agency period and Bledsoe sent to Milwaukee in November. Former Cavs point guard Kyrie Irving was the team’s main bargaining chip in both proposed deals.

A potential George-for-Irving deal had reportedly been proposed by former general manager David Griffin, but Griffin was let go before any trade consideration could be moved forward. In the case of Bledsoe, inquiries were made with his former team, the Phoenix Suns, after Irving requested a trade in July.

James is expected to become a free agent in July, with the Cavaliers’ current struggles potentially playing a role in whether or not he re-signs with the team.