Video: Knicks Fan Sends Warning to Cavaliers as They Prepare to Take Subway 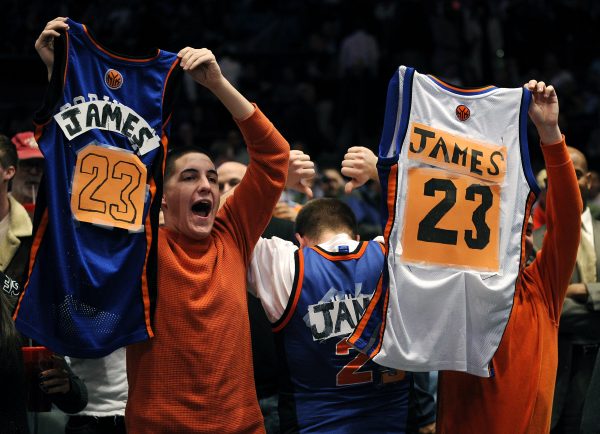 The Cleveland Cavaliers chose an unorthodox form of transportation on Monday when the team headed back from their morning shootaround to their hotel on the New York City subway system.

It was certainly a sight to behold as some of the biggest stars in basketball walked amongst everyday New Yorkers on their way to work. While the men and women they passed along the way were likely somewhat starstruck to see the likes of LeBron James, Dwyane Wade, and J.R. Smith walking amongst them, one New York Knicks fan took the opportunity to talk some trash before the Cavs and Knicks face off this evening.

As what appears to be the entire Cavs team heading down the steps towards their train, a voice can be heard off camera issuing a warning to the defending Eastern Conference champs:

James has already been involved in a bit of pregame banter regarding Knicks big man Enes Kanter, but has said nothing critical of Porzingis, who is currently averaging 30.4 points, 7.3 rebounds, and 2.3 blocks per game.

Monday night’s matchup between the Cavs and Knicks represents the meeting of the current face of the NBA in James and a possible future replacement in Porzingis. So far, James has fared very well against the up-and-coming stars in the NBA this season, defeating the likes of Milwaukee Bucks big man Giannis Antetokounmpo twice already and handing losses to other stars like Kyrie Irving and John Wall.

While the Knicks fan must surely feel confident that Porzingis will get the better of James and the Cavs for the second time this season, there’s no doubt that James will work to prove that he still holds the keys to the Eastern Conference.