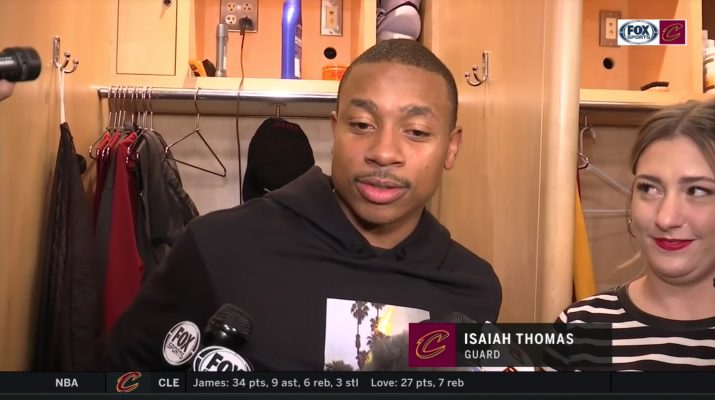 Having endured months of rehabilitation of his injured hip, Cleveland Cavaliers point guard Isaiah Thomas has been chomping at the bit to return to the court. While the date of his debut with the team remains uncertain, Thomas was able to don a Cavaliers uniform on Thursday night while taking part in the team’s warm-up drills.

After the Cavaliers’ win over the Chicago Bulls, Thomas spoke about the feeling of finally putting on the team jersey:

“It felt good. I’ve been down for six months, so that was a step in the right direction, to be able to put a jersey on and warm up,” Thomas said. “I haven’t done that in a while, so it was a blessing, man, to be able to do that again.”

Thomas was also asked about taking part in a 5-on-5 scrimmage with the team’s G-League affiliate Canton Charge:

“It felt good. I mean, for the most part, I’m able to do what I want out there,” Thomas said. “It’s just, I have no rhythm or no feel. Like, I haven’t played a 5-on-5 since the end May. So that part will come with more repetition. Hopefully I can get that, sooner rather than later, but the movement part, I’m pretty good with that. So, everything felt for the most part felt good, I was happy to be able to do that because I haven’t done that for so long.

Thomas indicated that his children were disappointed that he won’t be making his return in the Christmas Day matchup against the Golden State Warriors. However, he was realistic in assessing his level of rustiness after having been off the court for so long.

“I have no rhythm, so there’s no way I can play in an actual NBA game right now, I mean, and be very effective like I’m used to being,” Thomas said. “But slowly that will come back and I’ll get a feel for it, and then I also gotta get into some shape. That was probably the toughest part today, running up and down constantly and being a little winded. But the basketball part, I had a smile on my face the whole practice because I felt like a basketball player again. So that was good.”

The hip injury that Thomas suffered came while he was still playing with the Boston Celtics and caused him to miss the final three games of the Eastern Conference Finals against the Cavaliers. After he was dealt to the Cavs in August as part of the Kyrie Irving deal, Thomas’ acquisition was temporarily in limbo because of that injury. However, the deal was officially finalized in early September.