Cleveland Cavaliers vs. Chicago Bulls Game Recap: Down to the Wire 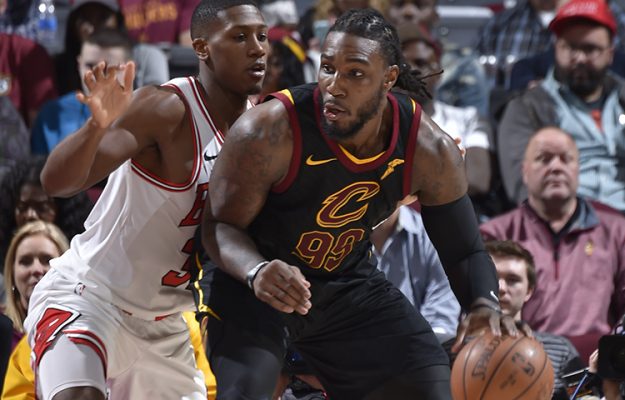 (Cleveland, OH) — A combination of 20 fourth-quarter points from LeBron James and Kyle Korver helped the Cleveland Cavaliers narrowly escape an upset bid by the Chicago Bulls in a 115-112 win at Quicken Loans Arena on Thursday night. The victory gives the torrid Cavs 19 wins in their last 21 contests.

In the final quarter, a 96-all tie saw Cleveland then score nine of the next 11 points to open up a 105-98 lead. Still, Chicago managed to make it a one-possession game with less than a minute to go and a one-point game at 113-112 with 14.3 seconds left. James then hit a pair of free throws with 11.1 seconds remaining and Jae Crowder‘s defense forced a desperation airball by the Bulls in the final seconds to clinch the game.

That tie at 96 was broken on what turned out to be a four-point play by Korver, the 17th such time it’s happened in his career.

“His name is Fourth Korver for a reason,” James said after the game. “So you want to continue to get the ball to him.”

The Cavs were without head coach Tyronn Lue, who sat the game out due to illness. Assistant coach Larry Drew took over his duties and then explained the circumstances surrounding Lue’s decision not to coach.

James ended the game with a game-high 34 points, scoring 11 of those in the final period. He also handed out nine assists and grabbed six rebounds, while Korver scored nine of his 15 points in those final 12 minutes. Kevin Love added 27 points and seven boards, while Jeff Green and Dwyane Wade came off the bench to each tally 10 points on the night.

“Chicago’s been playing well. To win seven straight in this league, you have something right, so we knew it wasn’t going to be easy,” Wade said immediately after the game. “It doesn’t matter what happens in the first three quarters, the fourth quarter is winning time.”

In addition to Lue being absent, starting shooting guard J.R. Smith was unable to play because of knee soreness. That resulted in Channing Frye taking his spot in the starting lineup.

“The knee was sore and he went through treatment during our shootaround this morning,” Drew said. “But it was just too sore, so we  held him out. I think right now he’s day-to-day.”

Despite multiple opportunities to take control of the game, the Cavs found themselves in a tight battle that went down to that final shot attempt. The contest saw 13 ties and 26 lead changes.

“It just seemed like it was knotted up throughout,” Love said. “We made plays when we needed to and got out of here with a win.”

The Cavaliers will now be off until Christmas Day, when they begin a stretch of eight road games in their next nine contests with a battle against their arch-rivals, the Golden State Warriors. Tipoff for that holiday game will be just after 3 p.m. ET, with the game scheduled to be broadcast nationally on ABC.