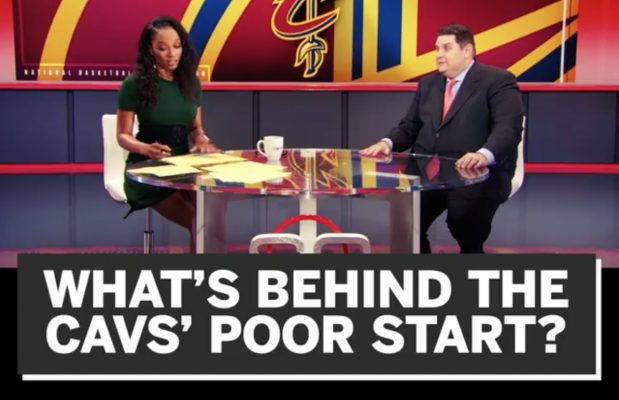 The Cleveland Cavaliers have yet to achieve any sort of rhythm so far this season and currently find themselves near the bottom of the Eastern Conference at a surprising 4-6 overall record.

LeBron James and Dwyane Wade have been vocal about the causes they see for the Cavs’ early-season struggles, but on Monday ESPN’s Brian Windhorst joined SportsCenter to give another reason that no Cavs fan wants to hear.

Brian Windhorst says there are a lot of reasons for the Cavs' 4-6 start.

“They have got a major issue starting games, because I’m telling you a lot of it has to do with Kyrie [Irving] not being there. Because him taking out exposes the weaknesses of other players,” Windhorst said. “A big part of it is the Cavs missing Kyrie Irving and Kyrie is 8-2, eight straight wins last night, he’s doing just fine.”

After the drama that Irving caused for the Cavaliers before his eventual trade to the Boston Celtics this offseason, nothing would have been sweeter than to see the All-Star point guard struggle in his new home. Since the Cavs bested the Celtics on opening night, though, the two teams have gone in two very different directions, with the Celtics finding an early-season groove and the Cavs finding everything but that.

There is no reason for the Cavs to hit the panic button just yet. With Isaiah Thomas reportedly on track to return to the court sooner than expected, James and company could get a huge offensive boost soon. Hopefully, the Cavs are able to turn things around before that, however, and find a way to reclaim their winning ways.