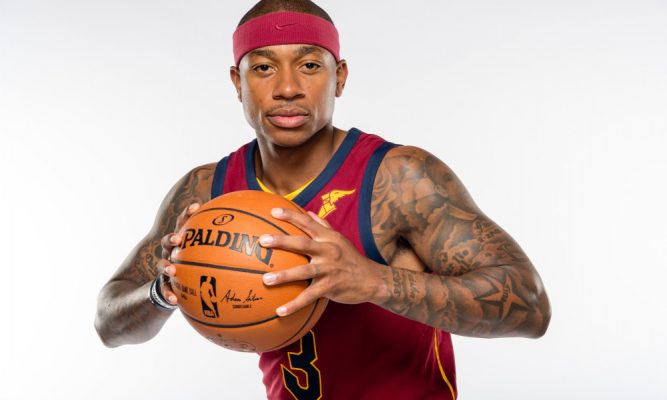 The Cleveland Cavaliers are patiently waiting for All-Star point guard Isaiah Thomas to return from a lingering hip injury he sustained last season. Thomas was most recently projected to return around Jan. 1, but according to a Joe Vardon of Cleveland.com, the Cavs may be getting their star point guard sooner than they expected:

“Isaiah Thomas’ timetable for return seems to be accelerating from the original target of January 1.”

There has been no official update from the team, but Thomas has seen an uptick in activity in both practice and pregame warmups.

“Though there has been no official update on that target from the Cavs, Thomas’ on-court work has increased at practice and before games,” Vardon wrote. “He received a full training-table stretching and treatment before Friday’s game in Washington, and then hit the court for stationary, one-dribble, and two-dribble shooting, as well as some half-speed drives to the hoop.”

In Thomas’ absence, former MVP Derrick Rose has been serving as the Cavs’ primary point guard. Rose has struggled with early-season injuries as he has missed four games with a sprained left ankle. Still, he has been performing well when healthy, averaging 16.0 points, 2.8 rebounds, and 1.8 assists per game.

Other than LeBron James, who is averaging 29.1 points per game, the Cavs have struggled to find consistent offensive weapons so far this season. Last season, Thomas averaged 28.9 points and 5.9 assists a game, and his return would certainly add another elite offensive weapon to the team.

The Cavaliers have struggled out of the gates this season with a record of 4-6. The sooner Thomas can take the court in full health, the sooner the whole team can bounce back and reclaim their place as one of the top dogs in the Eastern Conference.