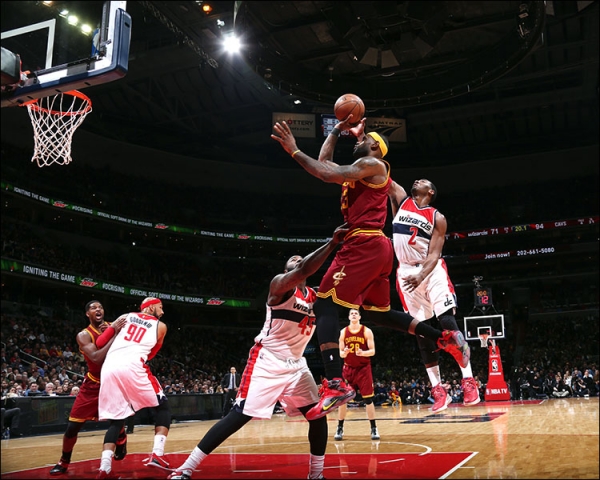 (Washington, DC) – The Cleveland Cavaliers (34-22) put on a show Friday night as they demolished the Washington Wizards (33-22) at Verizon Center by a highly lopsided score of 127-89. The game was a rout early on as the Cavs led by as many as 22 points in the first half and led by 40 points late in the fourth quarter.

LeBron James, who only saw a mere 25 minutes of action on the court Friday night, led all scorers with 28 points to accompany his six assists and five rebounds, while Kyrie Irving added 25 points and seven assists of his own.

“Just trusting each other and being basketball players out there,” said Irving after the game. “We’re all pretty good at what we do. All five of us can get in double figures and as we showed tonight we have a great bench that can come in and give us a lot of energy on both ends of the floor.”

Indeed, the bench was very dynamic for the Cavs on the night as Iman Shumpert and James Jones both scored in double figures with 12 and 10 points respectively. Tristan Thompson was huge on the glass as he nabbed nine rebounds (four offensive) to go with his six points, while Matthew Dellavedova added eight points of his own.

A team of ups and downs all season, the Cavs have now won 13 of their last 15 games en route to the current fourth seed in the Eastern Conference. During the stretch, the Cavs offense continues to look magnificent and the play of their defense has gradually gotten better. On the night, the Cavs outscored the Wizards 33-10 in points off turnovers.

However, the statistic that jumps off the page was that the Cavs nailed 14 of their 33 attempts from behind the arc, while the Wizards went a dismal one of 16 from three-point range. J.R. Smith, who had 15 points and five rebounds on the night, contributed with three treys of his own to go along with Irving, Shumpert and Jones’ three makes from long-range each.

“Guys are maturing and we’re learning how to be great teammates to one another,” said Irving. “It’s going to take some time and we have a lot of high expectations from the outside, but internally in the locker room we just had to figure things out. Now we have to make a second-half push.”

The Wizards, who were without standout shooting guard Bradley Beal due to his toe and leg injuries, were outscored by at least five points in each quarter and simply looked out-of-sync all night in front of their home crowd. All-Star point guard John Wall, who currently leads the league in assists with 10.1 per game, scored 18 points and dealt out nine assists while power forward Nene Hilario tacked on 18 points as well.

Kevin Love, who had an off-night offensively with only eight points, distributed the ball well and played great defense that resulted in three steals. However, Love had a play in the closing minute of the first half that will surely guarantee him a spot atop lowlight reels like “Shaqtin’ a Fool” on TNT. After he faked a three pointer on Drew Gooden, Love drove to the basket for what appeared to be an easy dunk but was rejected by the rim after an ill-timed jump.

“I set us back with that one,” said Love with a grin.

Up next, the Cavs will travel to New York to take on the Knicks (10-44), who currently possess the worst record in the entire NBA, at Madison Square Garden on Sunday afternoon. The game is slated to tip off shortly after 1:00 pm ET.