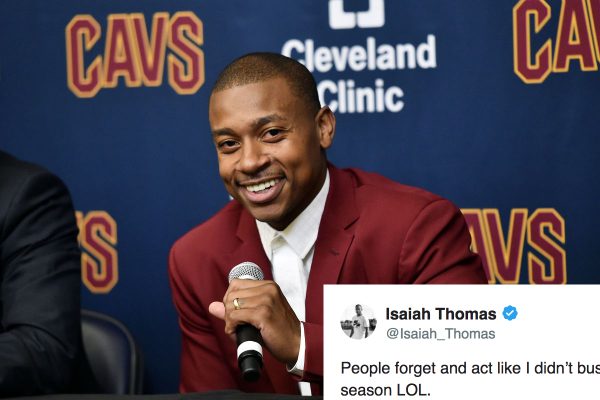 Among the issues that the Cleveland Cavaliers are currently facing as they attempt to bounce back from a slow start is the absence of point guard Isaiah Thomas, the key part of the acquisition that sent Kyrie Irving to the Boston Celtics in August. Thomas is continuing to rehabilitate his injured hip and isn’t expected to play for the Cavs until January.

Despite that concern, as well as speculation that Thomas may never again produce like he did during the 2016-17 NBA season because of the severity of the injury, the 5-foot-9 guard remains confident about his ability to perform at a high level and took to social media to make that clear.

People forget and act like I didn’t bust they favorite PGs ass all last season LOL.

Last year, Thomas averaged 28.9 points and 5.9 assists per game, shooting 38 percent from long-range. He suffered the hip injury during the latter part of the regular season, then helped his Celtics team reach the NBA Eastern Conference Finals, where they lost in five games to the Cavaliers. Thomas missed the final three games of that series when he could no longer play because of the injured hip.

Thomas will be especially motivated to perform at a top level because he can become an unrestricted free agent at the end of this season. Putting up similar numbers to last year and helping lead the Cavaliers to their second NBA title in three years would help his price tag go up immeasurably.