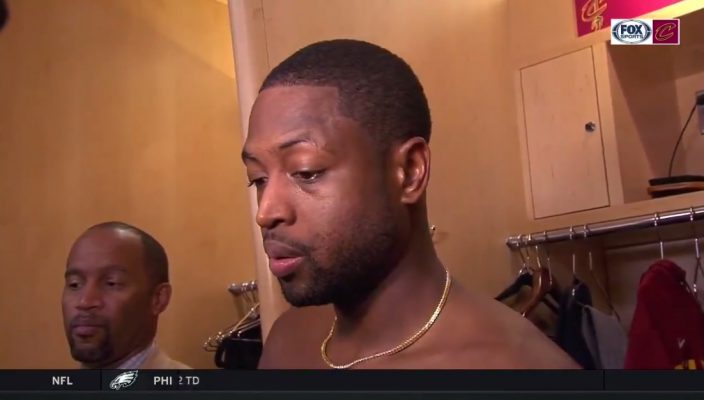 The Cleveland Cavaliers dropped a 117-115 decision on Sunday afternoon to the 2-8 Atlanta Hawks, continuing a frustrating start to the 2017-18 NBA season for the team. The contest’s leading scorer Dwyane Wade spoke in his postgame remarks about what the main issue is with the Cavaliers’ current struggles.

"It's no secret, we're starting games off awful."@DwyaneWade gives an in-depth account of the state of the @cavs following the loss. pic.twitter.com/2OqOBipF7f

“It’s the focus and the effort from the get-go. You know, you got a team that’s 1-8, you got to take their confidence away early,” Wade said, “Once you give a team in this league confidence, your work can go out the window. These NBA players that can play, then they get it going. It’s no secret, we’re starting off games awful, terrible. They got it going early and the effort and the focus just wasn’t there to start it off. You’re trying to battle back, you waste a lot of energy trying to come back from 16, 18 back, it’s tough, nightly to do that.

“We all know this, it’s no secret to the locker room, but our first unit, we’ve got to start off better. I want one time for the first unit to get on the second unit because we blew a lead. I’m waiting for that day to happen. We’ve definitely got to start off better. I know it’s a long season and you’ve got time to correct it, but you don’t want to be losing these games right here. For a team to come here at 1-8. It’s like, as a team right now they got go-to players, we can play and we know what we’re doing, but (now) they ain’t got go-to players and are just playing freelance basketball and we’re in trouble and they’re tearing us up. We definitely have to figure it out, because that’s going to be a lot of teams we play.”

Wade finished with 25 points in the game, 19 of those coming in the first half. His eight points in the first quarter managed to cut the Cavaliers’ deficit to nine points by the end of the period. He also collected his first double-double of the season by grabbing 11 rebounds, while also handing out six assists.

The Cavaliers will try and get back on track when they host the Milwaukee Bucks on Tuesday night, with tipoff set for just after 7 p.m. ET.