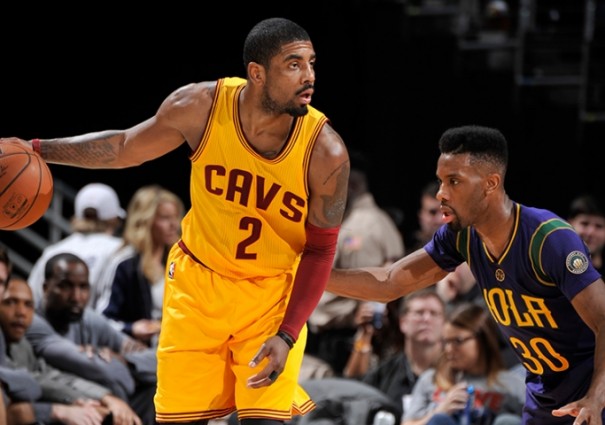 (Cleveland, OH) – The trio of Kyrie Irving, LeBron James and J.R. Smith combined for 76 points as the Cleveland Cavaliers shook off Friday night’s jarring last-second loss with a 99-84 victory over the New Orleans Pelicans at Quicken Loans Arena on Saturday evening.

The trio’s offensive output was matched with strong fourth-quarter defense that saw the Hornets make just 20 percent (4-of-20) of their shots during the period.

The Cavaliers needed a 21-10 run in the final 10 minutes to finally take control and eliminate the specter of a second-straight collapse down the stretch. New Orleans was held scoreless for the last 4:19, missing their final five shots.

Despite the win, Cleveland head coach Tyronn Lue spoke about the need for improvement:

“Right now, our flow isn’t good,” Lue said. “We have to be in better shape to be ready for the long haul.”

James spoke about the difficulty in adapting to Lue’s new approach on the fly:

“He wants us to play tempo and not play strong side as much,” James said. “It’s not a huge system, we’re going to have to be patient, but we have to play with a better sense of urgency.”

In the final quarter, the Pelicans had multiple chances to make it a one-possession game, but were unable to connect, even though the Cavs kept allowing them such opportunities due to a trio of turnovers in the first three minutes of action.

Irving was asked after the game about how the team approached the game:

“We just came in with the mindset that we had to take care of our homecourt.”

A pair of players that only combined for two points on the night for Cleveland served as the team’s key rebounders. Tristan Thompson collected 15 boards despite being held scoreless, and was joined by Anderson Varejao, who scored two points and hauled down 10 rebounds.

Varejao played 27 minutes since Kevin Love didn’t dress because of a left thigh contusion that he sustained in Friday night’s loss. Love was joined on the bench by guard Matthew Dellavedova, who sat out his third consecutive contest with a sore left hamstring.

Lue took the time afterwards to praise the effort of Varejao:

“He was very important,” Lue said. “All year, when we’ve called his number, he’s been ready.”

Cavaliers fans must’ve had flashbacks to Friday night when they watched an 11-point lead at halftime shrink to just four at 74-70 by the end of the third quarter. The key factors in that stretch were the Pelicans hitting seven of their first eight shots, while the Cavs hit just 33 percent of their shot attempts for the quarter. Those struggles followed a 37 percent effort for Cleveland in the second period.

The Cavs especially struggled with their three-point shot in the third, hitting just 4-of-16 attempts. Lue was asked about the strategy behind putting up so may long-range attempts after the break:

“That was the way the flow went, but we just didn’t make them.”

Unlike Friday night’s free-throw struggles, Cleveland had few problems at the line simply because they only got there seven times all night, hitting all seven attempts.

Lue attempted to explain the oddity:

“They did a good job of packing the paint and making us shoot threes,” Lue said.

Staying at home for a Monday night clash, the Cavaliers will go against the Sacramento Kings, with that game set to tip off just after 7 p.m. ET.