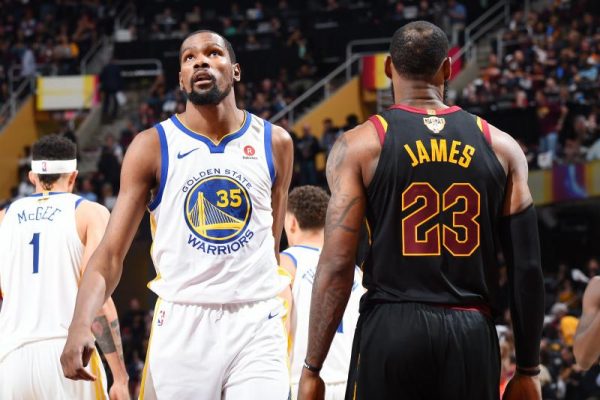 The moment the 2018 NBA Finals came to an end fans and experts everywhere began predicting where LeBron James might sign this offseason.

Interestingly, one of the teams that James will reportedly meet with this summer is the very same team that he has battled against in the last four NBA Finals series, the Golden State Warriors.

For Cleveland Cavaliers fans, the idea of James joining the Warriors might be too much to bear. Luckily, Warriors star Kevin Durant seems quite confident that that will not happen.

“So, if LeBron wanted to come to the Warriors next season,” Jimmy Kimmel asked. “Would you be excited about that, or would you feel like, ‘Alright, this is now not fair. We’re the Harlem Globetrotters here.'”

Durant smiled and spoke his mind.

“I just don’t think that will happen,” Durant said. “I don’t want to go there. Somebody who is listening is going to write something. So I’d rather, I don’t know, I stay on my side.”

While Warriors fans would surely love to bring another league MVP to the Bay Area and make their advantage over the rest of the NBA even greater, it seems clear that Durant doesn’t expect to have James as a teammate anytime soon.

It will be fascinating to see what comes out of the meeting between the Warriors and James this summer. Whatever it is, it seems quite likely that it will not be a contract.