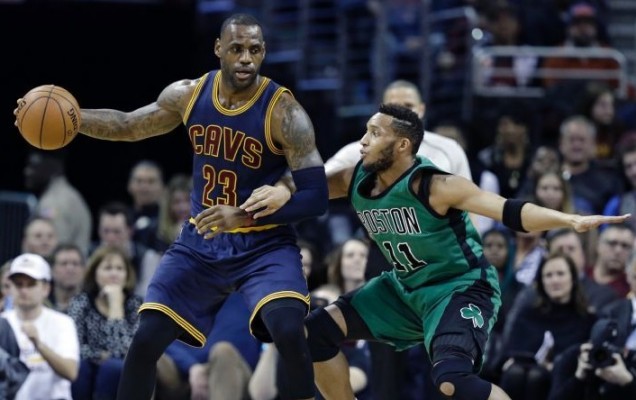 (Cleveland, OH) – A stunning collapse in the final seconds turned what looked to be a victory for the Cleveland Cavaliers into a heartbreaking defeat as they fell 104-103 to the Boston Celtics at Quicken Loans Arena on Friday night.

Kyrie Irving hit four free throws in the final 20 seconds, the first pair coming with 18.7 seconds left, which gave the Cavs a 101-96 advantage. The latter two came with 7.5 seconds remaining and gave the Cavaliers a 103-99 lead.

However, Boston’s Evan Turner scored on a driving layup with 4.9 seconds to go, and was fouled. His free-throw attempt missed, but the Cavs were unable to grab the rebound. That allowed the Celtics an inbound play, with Avery Bradley hitting a corner three-pointer at the buzzer for the win.

“We said, just give them a layup,” Lue said. “It was a perfect storm.”

Irving was philosophical about Turner’s basket:

“Shump (Iman Shumpert) contested it, you just have to live with the results,” Irving said.

The shocking finish spoiled what had been a furious comeback that saw Cleveland score nine unanswered points in an 89-second span to take a 94-92 lead with 1:50 left. The key to that comeback was LeBron James, who scored 13 fourth quarter points.

James led all scorers with 30 points, seven rebounds and four assists, and was joined in double figures by J.R. Smith with 20 points, Irving with 19, and Kevin Love with 10.

A dejected James was asked about the dramatic finish in the locker room:

“It’s not about the wins and losses, it’s about how we lost,” James said. “It’s been a long time since I felt like this.”

The ironic part of Irving hitting his four free throws was that the Cavaliers essentially cost themselves the game with their poor foul shooting. During their comeback, they connected on 8-of-9 from the charity stripe, but had missed 14 free throws prior to that, hitting on just 46 percent of their first 26 attempts.

Lue was asked about the free-throw struggles:

“I can’t describe it,” Lue said. “You just have to step up and make free throws.”

Another down note for the Cavs was Love, who limped off to the locker room with two minutes left in the third quarter. There’s no word on his status for Saturday night’s game against the New Orleans Hornets.

Speaking in the locker room after the game, Love wasn’t overly concerned about a lingering issue:

“It’s just a thigh bruise, it felt like a dead leg for about 10 minutes,” Love said. “We’ll see tomorrow. Hopefully, I’ll be ready to play.”

The Cavaliers will look to gain a measure of revenge on Saturday night in that contest against the Hornets which will tip off just after 7:30 p.m. Back on December 4, the two teams engaged in an overtime thriller won by New Orleans, 114-108.