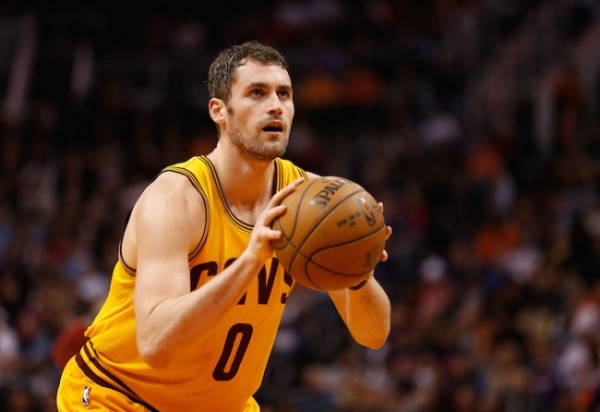 When the Cleveland Cavaliers traded last year’s top overall pick Andrew Wiggins to the Minnesota Timberwolves in exchange for Kevin Love, they were making a strong statement to the rest of the NBA.

Winning now meant that they weren’t willing to wait a year or two for Wiggins to develop into a key piece, but in a weird way, winning now doesn’t really mean right now, either. Winning now means winning in the playoffs, a place that’s remained foreign to the Cavaliers since LeBron James flew south in the summer of 2010.

The Cavs have already made that mission a reality, clinching a playoff berth back on March 20 with a win over the Indiana Pacers. Yet with the Cavs looking like a lock for the two-seed in the Eastern Conference, people are still waiting for Love to look like the player that he was in Minnesota.

Love has always been his team’s number one (and sometimes only) option on the offensive end. He carried the load in Minnesota in the same way that LeBron once carried the load here in Cleveland. Love was THE guy for his whole career and now he’s on a team where he’s the third best scoring option.

But he’s also on a team that’s matched his career-best in wins halfway through March. A team that’s headed to the playoffs for the first time in his career. A team that, since midseason trades shook up the locker room dynamic, has so much fun on the basketball court that it stirs up memories of LeBron pretending to take pictures of the team during introductions.

So why the big fuss over Love and his so-called issues?

If you’re looking strictly at statistics, it would be easy to say that Love is struggling this season. But as is usually the case, the numbers can be deceiving if you don’t know where to look.

Love is averaging his lowest scoring total since his sophomore season with 16.5 points per game, but that stat won’t tell you the whole story. Look a little deeper and you’ll see a clear explanation – He’s taken 529 less shots this season than he did last year with Minnesota, 893 vs. 1422.

No player is going to be able to maintain their scoring production while losing nearly 40% of their scoring opportunities. Looking past the raw scoring numbers, Love has been effective on offense, though his field goal percentage has dipped slightly from .457 in 2013-14 to .433 this year.

It’s so easy to forget when you’re watching the best players in the world, but basketball has always been a game of matchups. Love is an outstanding scorer and rebounder, but historically he has struggled on the defensive end. Also important to consider is that the Cavs have held a lead late in many of their contests this season, which helps explain why Love is on the bench during crunch time.

Love himself understands the thought process of Cleveland head coach David Blatt, saying “A lot of the times, it’s been matchups…I think it’s on me to do what’s best by the team, and just try to be a consummate professional.”

In many cases, it makes more sense for the Cavs to go with a pairing of Tristan Thompson and Timofey Mozgov up front with Iman Shumpert and James at the two and the three, respectively. Love understands his role well and insists that as long as the team is winning, he’s got no complaints.

Over the last few months, Blatt has earned the trust of his players and the organization after doing an exceptional job of adjusting to his new lineup and finding a steady rotation that works. It’s worth noting that Love is still averaging over 34 minutes a game, a mere two minutes less than last season. Come playoff time, Love will be on the floor in crunch time and his impact will not be overlooked.

But forget the numbers, the data and the matchups. Many are starting to speculate that his issues stem from the fact that Love simply isn’t happy in Cleveland.

In an interview with Mike and Mike on ESPN Radio less than two weeks ago, Love said that he and James “aren’t best friends,” and that they don’t hang out much off the court.

So much is made of a post-game Instagram photo (in the training room no less), that people forget to look past the image. James is a father, a husband, a businessman, a professional athlete and the head of a foundation that bears his name. He’s close with many of the players on the team, but he isn’t spending much time off the court with anyone except his family and his inner circle.

Nobody seems to be concerned that James Jones got left out of the picture. And what about Mike Miller? I mean we all know how close he and LeBron are, right? Actually, James said himself that he only considers three NBA players to be his very good friends – Chris Paul, Carmelo Anthony and Dwyane Wade.

“People get so infatuated with the best of friends, things of that nature,” James told Joe Vardon of Northeast Ohio Media Group. “First of all, I’ve got three very good friends in this league and that’s Carmelo, and that’s CP, and that’s D-Wade. After that I have a bunch of teammates, I have guys that I ride for every day. But Kyrie is a guy I understand how important he is to this team. And the same with Kev as well.”

The media will be so upset to see that storyline get squashed. With all this drama talk, it’s easy to let the things that have substance slide under the radar.

The same day as that Mike and Mike interview, Love also went on the Dan Patrick Show for an interview. When Patrick asked if winning a title would change Love’s thoughts about staying in Cleveland next year, Love replied by saying, “I plan on being a Cavalier either way.”

Wait, what?! Why wasn’t this the main story?

Because it doesn’t sell.

Don’t let the national media’s narrative fool you, Love is an integral part of this team’s success and he will have to be a key contributor if the Cavs are going to win an NBA title. The one area where Love has always been a liability is on the defensive end, and he’s still working to improve and get better on defense. In the meantime though, don’t assume that he’s not a key piece just because he’s on the bench with five minutes to go and the Cavs up by seven.

Cleveland didn’t trade for Love only for him to become an afterthought come playoff time. The issues are overblown and the successes are undermentioned. There is a pertinent explanation for every so-called “problem” that Love and the Cavs are facing and the team seems to be hitting its stride at the perfect time.

There’s no doubt in my mind that if James kicks the ball out to Love in the corner with game five of the Eastern Conference Finals on the line, Love will be more than ready to knock it down.

After all, he’s here to win now.