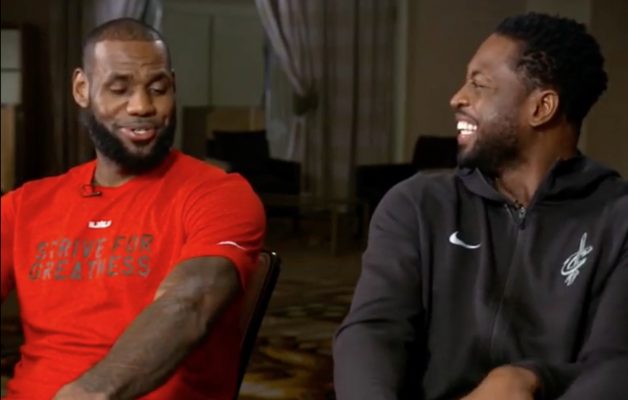 LeBron James is definitely happy to have his old pal Dwyane Wade back on his team. On Sunday, Wade and James sat down with ESPN’s Rachel Nichols and proved just how well the two Cleveland Cavaliers stars know each other.

James answered for his teammate as Wade looked on.

“He ain’t using his phone if there ain’t Wi-Fi.”

James then went into detail about how he saves his estimated $400 million net worth.

“No, I’m not doing that,” he said. “I’m not turning on data roaming. I’m not buying no apps. I still got Pandora with commercials so I be listening to some great music at home and then a commercial, ‘Hey you wanna win three tickets to go to the Cavs game, see LeBron, Dwyane, Kevin Love right now.’ It just happens.”

Nichols then asked whether or not James is jealous of Wade’s unmoving hairline.

The two have an impeccable connection off the court and have clearly started up right where they left off when they were teammates in Miami. All that is left to see is whether or not that connection will transfer to the court as well.