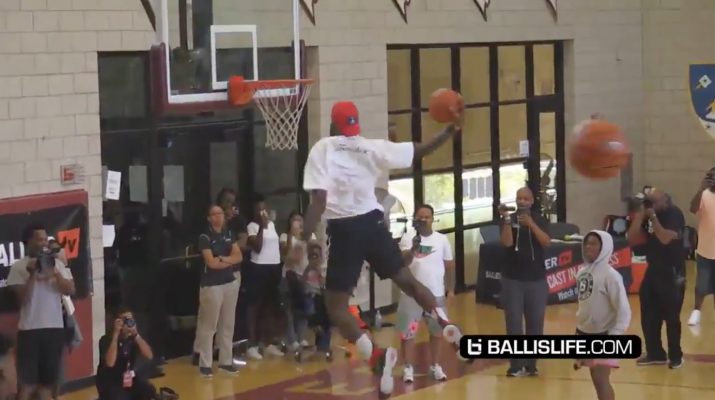 Cleveland Cavaliers legend LeBron James accomplished a ton while he played in the Land. From capturing a championship to winning numerous MVP awards to raising millions of dollars for the youth, the King has done it all. However, one thing James never got involved with was the dunk contest.

Much to fans’ disdain, the 6-foot-8 freight train never participated in the highlight event of All-Star Saturday. Although James would perform fancy dunks and power slams in regular games, he never wanted to do it for the sole purpose of entertaining people and winning an award.

However, that changed Saturday when the new Los Angeles Lakers forward put on a personal dunk contest before his son’s AAU game:

James, 33, can still fly and throw down some nice dunks. Despite eight straight trips to the NBA Finals — essentially playing hardcore basketball for at least nine months a year — the NBA All-Star hasn’t lost a step. In fact, the league’s best player might just be getting better.

Last season, the 15-year veteran posted 27.5 points, 8.6 rebounds and a career-high 9.1 assists while playing all 82 games of the season. In the playoffs, James continued his dominance with averages of 34.0 points, 9.1 rebounds and 9.0 assists in 41.9 minutes of action.

Now that the forward is playing in the famous purple and gold and in one of the NBA’s finest cities, he might just find it the right time to finally take part in the dunk contest. The 2019 All-Star Weekend festivities will take place in Charlotte, city of Charlotte Hornets majority owner and NBA icon Michael Jordan.