Don't Miss
Home / Media / Kevin Love: Championship or Not, ‘I Plan on Being a Cavalier Either Way’

Kevin Love: Championship or Not, ‘I Plan on Being a Cavalier Either Way’ 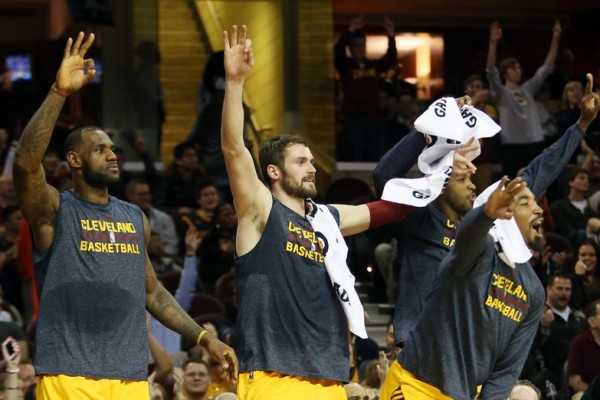 A series of comments made by Cleveland Cavaliers’ power forward Kevin Love on two radio appearances on Monday caused plenty of speculation that once again called into question his relationship with LeBron James as well as his status past this season.

Since coming to the team last August, Love’s potential free agency has been the source of continuing speculation. Each time, Love has answered emphatically that he plans to re-sign.

Still, when Love was asked on Dan Patrick’s show, “Who’s having a better year between these two: James or Oklahoma City Thunder Russell Westbrook, your former (UCLA) teammate,” his response was one that figures to result in some controversy.

“Oh, I would just say because of time spent on the court…Russell Westbrook,” said Love, who then added, “They’re both having MVP-type seasons, but I’m going to go with Russell Westbrook.”

Given some perspective, the Westbrook comments are really nothing new, given their past UCLA connections. Last year, Love took to Twitter last year to defend Westbrook against criticism after the Thunder’s season-ending loss to the eventual champion San Antonio Spurs.  Love said that Westbrook was among the top five players in the world. Just after tweeting that, he said the same thing concerning Tim Duncan.

The status of Love past this season was also brought up by Patrick, who asked if winning a championship would make a difference in his decision. His response was quick, saying, “I plan on being a Cavalier either way.”

Earlier, Love had appeared on ESPN Radio’s Mike and Mike program morning, and was asked about his relationship with James in light of an Instagram posting that James made following Sunday’s game. In it, there was a photo of James with six other teammates (none of whom was Love) that read, “Here’s my clique.”

“It’s fine,” said Love, who added, “You know, we’re not best friends. We’re not hanging out every day, but we see each other every day, whether at the practice facility, whether on the road or going to a game. I think our relationship is also evolving.” Love later joked, “I’m sure that, you know, he’s going to have me in the next picture. We’ll see.”

Love’s play this year has seen drops in his point production, while his playing situation has seen a number of occasions in which he has been on the bench during the fourth quarter of tight games.

However, Love dismissed any hint of a problem by saying, “A lot of times, if you look out on the floor when that’s happened, it’s been matchups.” He later offered, “So I think it’s on me to try to do what’s best for the team and always be a consummate professional throughout this entire process.”

Just a few days ago, former James teammate Alonzo Mourning also offered his opinion on Love’s status past this year during an interview on slamonline.com. According to Mourning, who previously criticized James’ decision to return to Cleveland, Love will return to play for Los Angeles, though he gave no indication if that would be with the Lakers or Clippers.

Last Friday, the Cavs clinched a playoff berth, which will mark the first time in his seven seasons that Love will be competing in the postseason.

cleveland cavaliersfeaturedkevin lovelebron jamesnews tickerOklahoma City ThunderSan Antonio Spurs
← Previous Story LeBron: ‘Once I Get in the Playoffs, I’m Confident Against Anybody’
Next Story → An Exclusive Look at LeBron’s $9.2 Million Ohio Mansion (Full Gallery Inside)