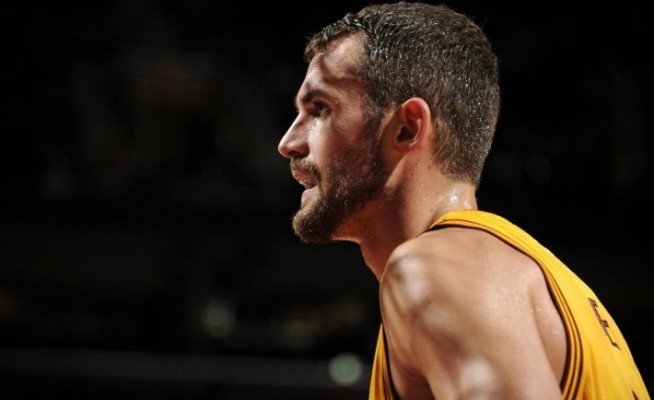 The continuing peaks and valleys of Kevin Love’s first season with the Cleveland Cavaliers is once again back in the valley phase after a five-point, eight-rebound effort in a 103-99 Friday night road loss to the Indiana Pacers.

The meager point total matched his effort in Monday’s 97-84 victory over the Philadelphia 76ers, and in postgame comments that were reported in the Cleveland Plain Dealer, Love was succinct in assessing his current situation, saying, “Oh yeah, definitely frustrating.”

Love then added to his comments by saying, “Yeah, I think it’s one of the toughest situations I’ve had to deal with, but at the end of the day, we’re winning basketball games. I know tonight was different. At the same time, there’s no blueprint for what I should be doing, but I’ll try my best to figure it out.”

Those struggles have been evident over the past 10 games, ironically a time when the team as a whole has been on a roll. During the period, Love is averaging three points less per game than his season average. In addition, his shot percentage has also noticeably slipped in the past seven clashes, making just 30 of his 86 outside shots, and only 10 of 38 three-point attempts.

One area that has remained consistent, though, has been Love’s production on the boards, which has allowed him to notch five double-doubles during that 10-game span.

The day after the Philadelphia performance, LeBron James said that confidence in his shot might be one of the issues holding back Love.

There is some consideration that Love’s health may be the cause of his problems, since he’s sat out games due to back spasms. In addition, his knees have taken some hits in the paint. However, such excuses have been dismissed by Love.

“It’s 52 games into the season,” he said. “Your body is going to be hurting, but I’m not going to use that as a crutch.”

Love’s struggles have led to media outlets chronicling his problems in detail, suggesting his presence in the Cavs lineup is actually hindering the team. They point to games, including last night where Love was kept on the bench during a crucial fourth quarter, as an indication that there could be some friction between him and head coach David Blatt. However, Blatt has insisted that this is only part of the game.

“There’s not a problem with him,” Blatt said. “He, like some others, didn’t have a great game. That’s part of basketball.”

Ordinarily, the struggles of a veteran player would not be so prominently featured. However, the fact that Love is not officially signed with the Cavaliers after this season gives rise to claims that this frustration will cause him to leave for another team after the season is over.

Love has continually shot such speculation down, but it figures to continue until he puts his signature on the dotted line for a max contract. When he does, the collective Cavalier fan base will be able to exhale.