Cleveland Cavaliers vs. Indiana Pacers Game Recap: All Good Things Must Come to an End 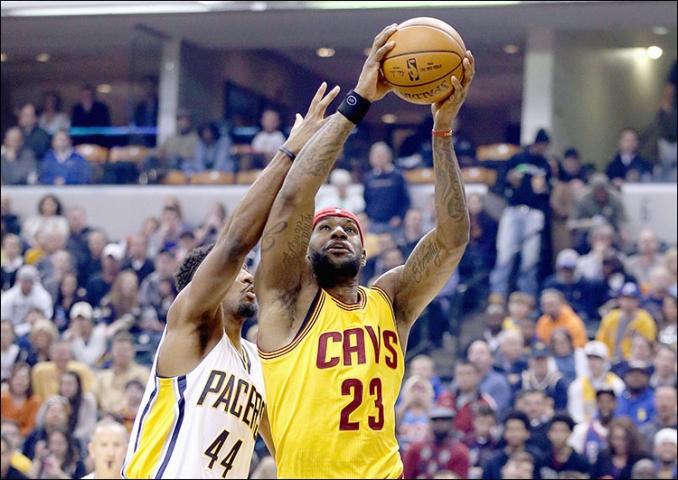 (Indianapolis, IN) – After going on a highly impressive run that lasted the course of three weeks, the Cleveland Cavaliers (31-21) finally proved to be human after a 103-99 humbling loss to the Indiana Pacers (19-32) at Bankers Life Fieldhouse on Friday night.

The loss was the result of a thrilling game in Indianapolis as the Pacers put an end to the Cavs’ 12-game winning streak, which fell one game short of tying the franchise’s longest streak.

“We haven’t had one of these in a while,” said Pacers head coach Frank Vogel after the game. “To see the combination that’s been successful for us working together with some new pieces is encouraging.”

Pacers guards C.J. Miles and George Hill were largely responsible for their team’s come-from-behind victory over the Cavs, as Miles scored 16 of his 26 points in the fourth quarter. Miles, who played for the Cavs during the 2012-2013 and 2013-2014 season, was magnificent against his former club while Hill, who scored nine of his 20 points in the final 12 minutes, made a ridiculous three-point shot as he was fouled near the end of the game.

After Iman Shumpert‘s clutch three pointer to give the Cavs a 92-91 lead with 1:40 remaining, Hill swished a 26-foot, one-handed three pointer as he was fouled by Kyrie Irving with 1:25 left in the game. After the home crowd erupted following the miraculous shot, Hill calmly sank his free throw to give the Pacers a 95-92 lead that they would not surrender despite J.R. Smith‘s two three pointers in the final 12 seconds of the game. Smith, who has been a stud for the Cavs ever since he arrived in Cleveland, finished with 17 points in the contest.

Irving led all scorers with 29 points to go along with five assists and four rebounds on the night, while LeBron James added 25 points, six rebounds, five assists and two steals. Despite the team’s 11 made three-point field goals on Friday, the Cavs hoisted up an eye-popping 35 attempts and turned the ball over 15 times compared to the Pacers’ eight.

The Cavs also did not have an answer for Pacers power forward David West, whose double-double (20 points and 13 rebounds) came on nine of 15 shots made in only 29 minutes. West had a lot of praise for his teammates after the victory, especially Hill’s presence on the court.

“I think with George (Hill) back in the lineup, he pushes the tempo for us, gets us in the right flow,” said West, as the Pacers are now 4-1 with Hill in the starting lineup.

After a great game against the Clippers in Thursday night’s 105-94 victory over Los Angeles, Kevin Love disappeared again to score only five points on two of eight shots from the field. Cavs head coach David Blatt certainly noticed Love’s struggles as he was benched for the entire fourth quarter.

Up next on their schedule, the Cavs will look to start another winning streak as they’re scheduled to host the Los Angeles Lakers (13-37) on Sunday afternoon at Quicken Loans Arena. The game is slated to tip off shortly after 3:30 pm ET and will be broadcast nationally on ABC. Last month, the Cavs started their 12-game winning streak with a 109-102 victory over the Lakers at Staples Center.