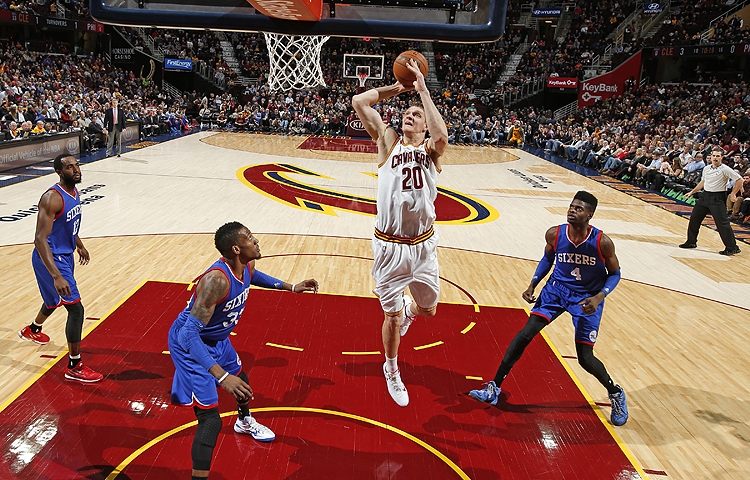 (Cleveland, OH) – Despite an early fourth quarter rally from the Philadelphia 76ers (10-39), the Cleveland Cavaliers (30-20) pulled away late in the game to win 97-83 at Quicken Loans Arena on Monday night, which marked their season-high 11th straight victory.

The Cavs kept a comfortable double-digit lead over the Sixers for most of the game until the third quarter, where Philadelphia managed to sink six three pointers to cut a 17-point third quarter deficit to just four. Luckily, the Cavs distanced themselves again from the 76ers in the final 12 minutes of the game.

“Never underestimate a win,” said Cavaliers head coach David Blatt. “But you can learn a lot from wins that aren’t spectacular. Certainly, tonight was not spectacular.”

Kyrie Irving led all scorers with 24 points (nine of 14 from the field) to go along with five assists and five rebounds and LeBron James added a double-double with 18 points, 11 assists, three rebounds and two steals. With the victory, the Cavs are now 28-12 on the season when James is in the starting lineup.

“We haven’t done anything yet,” said James after the game, as the team still has a lot of ground to cover.

With the win, the Cavs moved within half a game of the Chicago Bulls (30-19) for the fourth seed in the Eastern Conference.

Timofey Mozgov, who has settled in quite nicely for the Cavs over the past month, was an absolute monster on defense as he recorded five blocks and eight rebounds in addition to his 10 points. Despite an awful performance from the field (one of seven shots made for five points), Kevin Love was the only player for both teams to have double-digit rebounds with 15 on the night. Since all of Love’s shot attempts came in the first quarter, this statistic came as a surprise to his teammates.

“I didn’t even know, honestly,” said Irving. “He was doing other little things for us to win.”

Off the bench for Cleveland, Matthew Dellavedova scored 10 of his 12 points in the fourth quarter on three shots made from behind the arc. Additionally, Iman Shumpert drained two three pointers of his own as part of his 11 points and two steals.

“(He has) mental toughness, defensive capabilities, hustle and knocks down the open shots,” said Coach Blatt on Dellavedova. “Most importantly, (he) plays for the team. Delly does a great job for us at the end of games. I just felt he was the right guy to go with in this case.”

The 76ers, who have had a dismal season and lost leading scorer Tony Wroten (16.9 points per game in 30 games this season) to a torn ACL last month, tried to hang in there with the Cavs for as long as they could.

Small forward Robert Covington led the Sixers’ starters with 18 points (four of eight from three-point range) and a ridiculous seven steals on defense, while small forward Jerami Grant tacked on 18 points off the bench. Star point guard Michael Carter-Williams sat out most of the second half against the Cavs due to shin and ankle injuries.

Up next on their schedule, the Cavs will host the Los Angeles Clippers (33-16) on Thursday night at Quicken Loans Arena. The game is slated to tip off shortly after 8 pm ET and will be broadcast nationally on TNT. In their first matchup last month at Staples Center, the Cavs pulled off a wild 126-121 victory over the Clippers on January 16th.